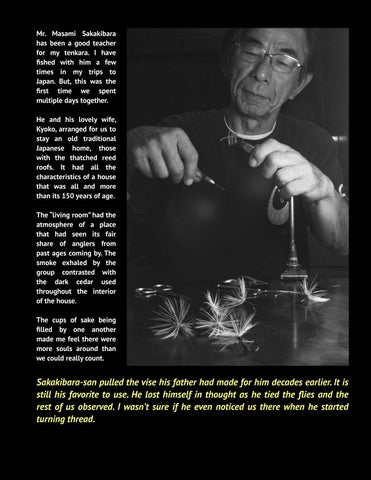 Mr. Masami Sakakibara has been a good teacher for my tenkara. I have ﬁshed with him a few times in my trips to Japan. But, this was the ﬁrst time we spent multiple days together. He and his lovely wife, Kyoko, arranged for us to stay an old traditional Japanese home, those with the thatched reed roofs. It had all the characteristics of a house that was all and more than its 150 years of age. The “living room” had the atmosphere of a place that had seen its fair share of anglers from past ages coming by. The smoke exhaled by the group contrasted with the dark cedar used throughout the interior of the house. The cups of sake being ﬁlled by one another made me feel there were more souls around than we could really count.

Sakakibara-san pulled the vise his father had made for him decades earlier. It is still his favorite to use. He lost himself in thought as he tied the ﬂies and the rest of us observed. I wasn’t sure if he even noticed us there when he started turning thread. 21