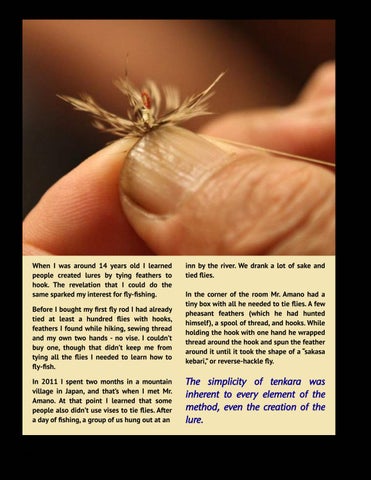 When I was around 14 years old I learned people created lures by tying feathers to hook. The revelation that I could do the same sparked my interest for ﬂy-ﬁshing. Before I bought my ﬁrst ﬂy rod I had already tied at least a hundred ﬂies with hooks, feathers I found while hiking, sewing thread and my own two hands - no vise. I couldn’t buy one, though that didn’t keep me from tying all the ﬂies I needed to learn how to ﬂy-ﬁsh. In 2011 I spent two months in a mountain village in Japan, and that’s when I met Mr. Amano. At that point I learned that some people also didn’t use vises to tie ﬂies. After a day of ﬁshing, a group of us hung out at an

inn by the river. We drank a lot of sake and tied ﬂies. In the corner of the room Mr. Amano had a tiny box with all he needed to tie ﬂies. A few pheasant feathers (which he had hunted himself), a spool of thread, and hooks. While holding the hook with one hand he wrapped thread around the hook and spun the feather around it until it took the shape of a “sakasa kebari,” or reverse-hackle ﬂy.

The simplicity of tenkara was inherent to every element of the method, even the creation of the lure.