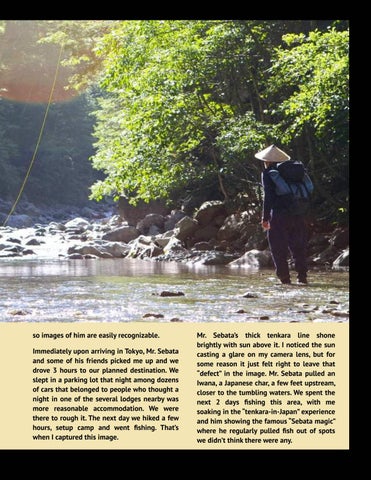 so images of him are easily recognizable. Immediately upon arriving in Tokyo, Mr. Sebata and some of his friends picked me up and we drove 3 hours to our planned destination. We slept in a parking lot that night among dozens of cars that belonged to people who thought a night in one of the several lodges nearby was more reasonable accommodation. We were there to rough it. The next day we hiked a few hours, setup camp and went ﬁshing. That’s when I captured this image.

Mr. Sebata’s thick tenkara line shone brightly with sun above it. I noticed the sun casting a glare on my camera lens, but for some reason it just felt right to leave that “defect” in the image. Mr. Sebata pulled an Iwana, a Japanese char, a few feet upstream, closer to the tumbling waters. We spent the next 2 days ﬁshing this area, with me soaking in the “tenkara-in-Japan” experience and him showing the famous “Sebata magic” where he regularly pulled ﬁsh out of spots we didn’t think there were any.