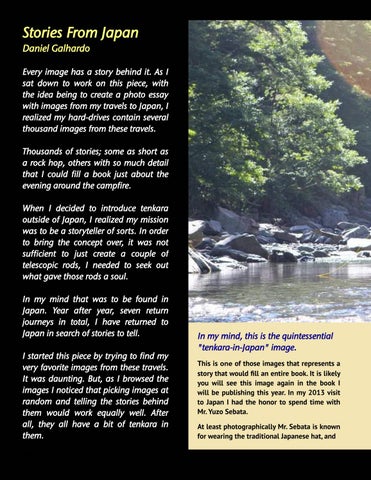 Every image has a story behind it. As I sat down to work on this piece, with the idea being to create a photo essay with images from my travels to Japan, I realized my hard-drives contain several thousand images from these travels. Thousands of stories; some as short as a rock hop, others with so much detail that I could fill a book just about the evening around the campfire. When I decided to introduce tenkara outside of Japan, I realized my mission was to be a storyteller of sorts. In order to bring the concept over, it was not sufficient to just create a couple of telescopic rods, I needed to seek out what gave those rods a soul. In my mind that was to be found in Japan. Year after year, seven return journeys in total, I have returned to Japan in search of stories to tell. I started this piece by trying to find my very favorite images from these travels. It was daunting. But, as I browsed the images I noticed that picking images at random and telling the stories behind them would work equally well. After all, they all have a bit of tenkara in them.

In my mind, this is the quintessential "tenkara-in-Japan" image. This is one of those images that represents a story that would ďŹ ll an entire book. It is likely you will see this image again in the book I will be publishing this year. In my 2013 visit to Japan I had the honor to spend time with Mr. Yuzo Sebata. At least photographically Mr. Sebata is known for wearing the traditional Japanese hat, and