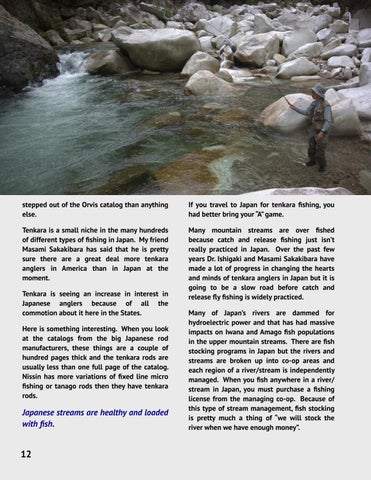 stepped out of the Orvis catalog than anything else.

If you travel to Japan for tenkara ﬁshing, you had better bring your “A” game.

Tenkara is a small niche in the many hundreds of different types of ﬁshing in Japan. My friend Masami Sakakibara has said that he is pretty sure there are a great deal more tenkara anglers in America than in Japan at the moment.

Many mountain streams are over ﬁshed because catch and release ﬁshing just isn’t really practiced in Japan. Over the past few years Dr. Ishigaki and Masami Sakakibara have made a lot of progress in changing the hearts and minds of tenkara anglers in Japan but it is going to be a slow road before catch and release ﬂy ﬁshing is widely practiced.

Tenkara is seeing an increase in interest in Japanese anglers because of all the commotion about it here in the States.

Here is something interesting. When you look at the catalogs from the big Japanese rod manufacturers, these things are a couple of hundred pages thick and the tenkara rods are usually less than one full page of the catalog. Nissin has more variations of ﬁxed line micro ﬁshing or tanago rods then they have tenkara rods.

Japanese streams are healthy and loaded with ﬁsh.

Many of Japan’s rivers are dammed for hydroelectric power and that has had massive impacts on Iwana and Amago ﬁsh populations in the upper mountain streams. There are ﬁsh stocking programs in Japan but the rivers and streams are broken up into co-op areas and each region of a river/stream is independently managed. When you ﬁsh anywhere in a river/ stream in Japan, you must purchase a ﬁshing license from the managing co-op. Because of this type of stream management, ﬁsh stocking is pretty much a thing of “we will stock the river when we have enough money”.