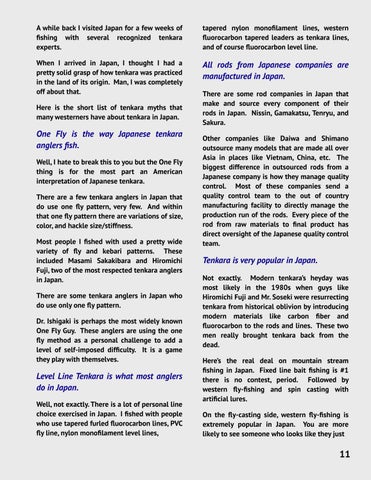 A while back I visited Japan for a few weeks of ﬁshing with several recognized tenkara experts.

When I arrived in Japan, I thought I had a pretty solid grasp of how tenkara was practiced in the land of its origin. Man, I was completely off about that.

All rods from Japanese companies are manufactured in Japan.

Here is the short list of tenkara myths that many westerners have about tenkara in Japan.

One Fly is the way Japanese tenkara anglers ﬁsh. Well, I hate to break this to you but the One Fly thing is for the most part an American interpretation of Japanese tenkara.

There are a few tenkara anglers in Japan that do use one ﬂy pattern, very few. And within that one ﬂy pattern there are variations of size, color, and hackle size/stiffness.

Most people I ﬁshed with used a pretty wide variety of ﬂy and kebari patterns. These included Masami Sakakibara and Hiromichi Fuji, two of the most respected tenkara anglers in Japan.

There are some tenkara anglers in Japan who do use only one ﬂy pattern. Dr. Ishigaki is perhaps the most widely known One Fly Guy. These anglers are using the one ﬂy method as a personal challenge to add a level of self-imposed difﬁculty. It is a game they play with themselves.

Level Line Tenkara is what most anglers do in Japan. Well, not exactly. There is a lot of personal line choice exercised in Japan. I ﬁshed with people who use tapered furled ﬂuorocarbon lines, PVC ﬂy line, nylon monoﬁlament level lines,

There are some rod companies in Japan that make and source every component of their rods in Japan. Nissin, Gamakatsu, Tenryu, and Sakura. Other companies like Daiwa and Shimano outsource many models that are made all over Asia in places like Vietnam, China, etc. The biggest difference in outsourced rods from a Japanese company is how they manage quality control. Most of these companies send a quality control team to the out of country manufacturing facility to directly manage the production run of the rods. Every piece of the rod from raw materials to ﬁnal product has direct oversight of the Japanese quality control team.

Tenkara is very popular in Japan. Not exactly. Modern tenkara’s heyday was most likely in the 1980s when guys like Hiromichi Fuji and Mr. Soseki were resurrecting tenkara from historical oblivion by introducing modern materials like carbon ﬁber and ﬂuorocarbon to the rods and lines. These two men really brought tenkara back from the dead.

Here’s the real deal on mountain stream ﬁshing in Japan. Fixed line bait ﬁshing is #1 there is no contest, period. Followed by western ﬂy-ﬁshing and spin casting with artiﬁcial lures.

On the ﬂy-casting side, western ﬂy-ﬁshing is extremely popular in Japan. You are more likely to see someone who looks like they just