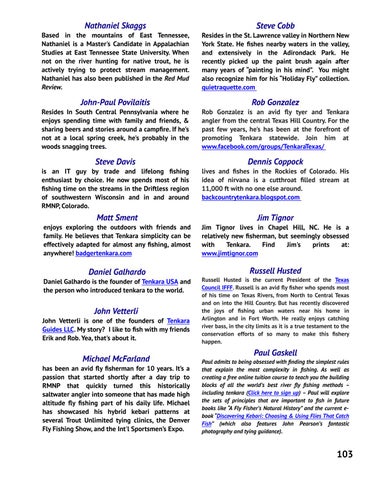 Based in the mountains of East Tennessee, Nathaniel is a Master's Candidate in Appalachian Studies at East Tennessee State University. When not on the river hunting for native trout, he is actively trying to protect stream management. Nathaniel has also been published in the Red Mud Review.

Resides in the St. Lawrence valley in Northern New York State. He ﬁshes nearby waters in the valley, and extensively in the Adirondack Park. He recently picked up the paint brush again after many years of “painting in his mind”. You might also recognize him for his “Holiday Fly” collection. quietraquette.com

Resides In South Central Pennsylvania where he enjoys spending time with family and friends, & sharing beers and stories around a campﬁre. If he's not at a local spring creek, he's probably in the woods snagging trees.

Rob Gonzalez is an avid ﬂy tyer and Tenkara angler from the central Texas Hill Country. For the past few years, he's has been at the forefront of promoting Tenkara statewide. Join him at www.facebook.com/groups/TenkaraTexas/

is an IT guy by trade and lifelong ﬁshing enthusiast by choice. He now spends most of his ﬁshing time on the streams in the Driftless region of southwestern Wisconsin and in and around RMNP, Colorado.

lives and ﬁshes in the Rockies of Colorado. His idea of nirvana is a cutthroat ﬁlled stream at 11,000 ft with no one else around. backcountrytenkara.blogspot.com

enjoys exploring the outdoors with friends and family. He believes that Tenkara simplicity can be effectively adapted for almost any ﬁshing, almost anywhere! badgertenkara.com

Jim Tignor lives in Chapel Hill, NC. He is a relatively new ﬁsherman, but seemingly obsessed with Tenkara. Find Jim's prints at: www.jimtignor.com

Daniel Galhardo is the founder of Tenkara USA and the person who introduced tenkara to the world.

John Vetterli is one of the founders of Tenkara Guides LLC. My story? I like to ﬁsh with my friends Erik and Rob. Yea, that's about it.

has been an avid ﬂy ﬁsherman for 10 years. It’s a passion that started shortly after a day trip to RMNP that quickly turned this historically saltwater angler into someone that has made high altitude ﬂy ﬁshing part of his daily life. Michael has showcased his hybrid kebari patterns at several Trout Unlimited tying clinics, the Denver Fly Fishing Show, and the Int'l Sportsmen’s Expo.

Russell Husted is the current President of the Texas Council IFFF. Russell is an avid ﬂy ﬁsher who spends most of his time on Texas Rivers, from North to Central Texas and on into the Hill Country. But has recently discovered the joys of ﬁshing urban waters near his home in Arlington and in Fort Worth. He really enjoys catching river bass, in the city limits as it is a true testament to the conservation efforts of so many to make this ﬁshery happen.

Paul admits to being obsessed with ﬁnding the simplest rules that explain the most complexity in ﬁshing. As well as creating a free online tuition course to teach you the building blocks of all the world’s best river ﬂy ﬁshing methods – including tenkara (Click here to sign up) – Paul will explore the sets of principles that are important to ﬁsh in future books like “A Fly Fisher’s Natural History” and the current ebook “Discovering Kebari: Choosing & Using Flies That Catch Fish” (which also features John Pearson’s fantastic photography and tying guidance).