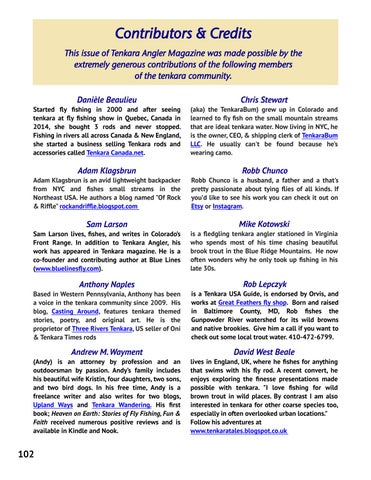 Contributors & Credits This issue of Tenkara Angler Magazine was made possible by the extremely generous contributions of the following members of the tenkara community. Danièle Beaulieu

Started ﬂy ﬁshing in 2000 and after seeing tenkara at ﬂy ﬁshing show in Quebec, Canada in 2014, she bought 3 rods and never stopped. Fishing in rivers all across Canada & New England, she started a business selling Tenkara rods and accessories called Tenkara Canada.net.

(aka) the TenkaraBum) grew up in Colorado and learned to ﬂy ﬁsh on the small mountain streams that are ideal tenkara water. Now living in NYC, he is the owner, CEO, & shipping clerk of TenkaraBum LLC. He usually can't be found because he's wearing camo.

Adam Klagsbrun is an avid lightweight backpacker from NYC and ﬁshes small streams in the Northeast USA. He authors a blog named "Of Rock & Rifﬂe" rockandrifﬂe.blogspot.com

Robb Chunco is a husband, a father and a that's pretty passionate about tying ﬂies of all kinds. If you’d like to see his work you can check it out on Etsy or Instagram.

Sam Larson lives, ﬁshes, and writes in Colorado’s Front Range. In addition to Tenkara Angler, his work has appeared in Tenkara magazine. He is a co-founder and contributing author at Blue Lines (www.bluelinesﬂy.com).

is a ﬂedgling tenkara angler stationed in Virginia who spends most of his time chasing beautiful brook trout in the Blue Ridge Mountains. He now often wonders why he only took up ﬁshing in his late 30s.

Based in Western Pennsylvania, Anthony has been a voice in the tenkara community since 2009. His blog, Casting Around, features tenkara themed stories, poetry, and original art. He is the proprietor of Three Rivers Tenkara, US seller of Oni & Tenkara Times rods

is a Tenkara USA Guide, is endorsed by Orvis, and works at Great Feathers ﬂy shop. Born and raised in Baltimore County, MD, Rob ﬁshes the Gunpowder River watershed for its wild browns and native brookies. Give him a call if you want to check out some local trout water. 410-472-6799.

(Andy) is an attorney by profession and an outdoorsman by passion. Andy’s family includes his beautiful wife Kristin, four daughters, two sons, and two bird dogs. In his free time, Andy is a freelance writer and also writes for two blogs, Upland Ways and Tenkara Wandering. His ﬁrst book; Heaven on Earth: Stories of Fly Fishing, Fun & Faith received numerous positive reviews and is available in Kindle and Nook.

lives in England, UK, where he ﬁshes for anything that swims with his ﬂy rod. A recent convert, he enjoys exploring the ﬁnesse presentations made possible with tenkara. "I love ﬁshing for wild brown trout in wild places. By contrast I am also interested in tenkara for other coarse species too, especially in often overlooked urban locations." Follow his adventures at www.tenkaratales.blogspot.co.uk