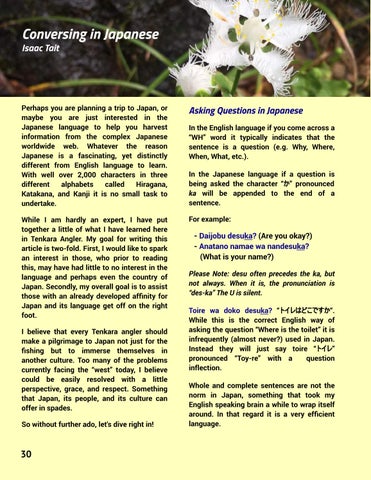 Perhaps you are planning a trip to Japan, or maybe you are just interested in the Japanese language to help you harvest information from the complex Japanese worldwide web. Whatever the reason Japanese is a fascinating, yet distinctly different from English language to learn. With well over 2,000 characters in three different alphabets called Hiragana, Katakana, and Kanji it is no small task to undertake.

While I am hardly an expert, I have put together a little of what I have learned here in Tenkara Angler. My goal for writing this article is two-fold. First, I would like to spark an interest in those, who prior to reading this, may have had little to no interest in the language and perhaps even the country of Japan. Secondly, my overall goal is to assist those with an already developed afﬁnity for Japan and its language get off on the right foot.

I believe that every Tenkara angler should make a pilgrimage to Japan not just for the ﬁshing but to immerse themselves in another culture. Too many of the problems currently facing the “west” today, I believe could be easily resolved with a little perspective, grace, and respect. Something that Japan, its people, and its culture can offer in spades.

So without further ado, let's dive right in!

In the English language if you come across a “WH” word it typically indicates that the sentence is a question (e.g. Why, Where, When, What, etc.).

In the Japanese language if a question is being asked the character “か か ” pronounced ka will be appended to the end of a sentence.

Please Note: desu often precedes the ka, but not always. When it is, the pronunciation is “des-ka” The U is silent.

Toire wa doko desuka? “トイレはどこですか トイレはどこですか“. While this is the correct English way of asking the question “Where is the toilet” it is infrequently (almost never?) used in Japan. Instead they will just say toire “トイレ トイレ” pronounced “Toy-re” with a question inflection.

Whole and complete sentences are not the norm in Japan, something that took my English speaking brain a while to wrap itself around. In that regard it is a very efﬁcient language.