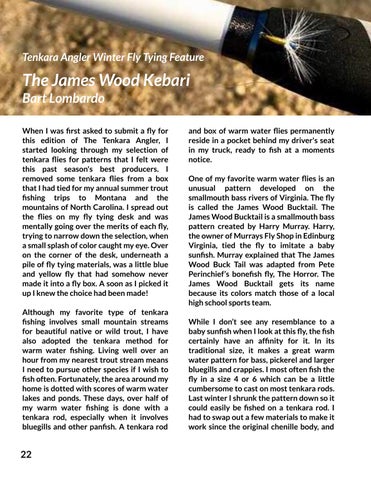 When I was ﬁrst asked to submit a ﬂy for this edition of The Tenkara Angler, I started looking through my selection of tenkara ﬂies for patterns that I felt were this past season's best producers. I removed some tenkara ﬂies from a box that I had tied for my annual summer trout ﬁshing trips to Montana and the mountains of North Carolina. I spread out the ﬂies on my ﬂy tying desk and was mentally going over the merits of each ﬂy, trying to narrow down the selection, when a small splash of color caught my eye. Over on the corner of the desk, underneath a pile of ﬂy tying materials, was a little blue and yellow ﬂy that had somehow never made it into a ﬂy box. A soon as I picked it up I knew the choice had been made! Although my favorite type of tenkara ﬁshing involves small mountain streams for beautiful native or wild trout, I have also adopted the tenkara method for warm water ﬁshing. Living well over an hour from my nearest trout stream means I need to pursue other species if I wish to ﬁsh often. Fortunately, the area around my home is dotted with scores of warm water lakes and ponds. These days, over half of my warm water ﬁshing is done with a tenkara rod, especially when it involves bluegills and other panﬁsh. A tenkara rod

and box of warm water ﬂies permanently reside in a pocket behind my driver's seat in my truck, ready to ﬁsh at a moments notice. One of my favorite warm water ﬂies is an unusual pattern developed on the smallmouth bass rivers of Virginia. The ﬂy is called the James Wood Bucktail. The James Wood Bucktail is a smallmouth bass pattern created by Harry Murray. Harry, the owner of Murrays Fly Shop in Edinburg Virginia, tied the ﬂy to imitate a baby sunﬁsh. Murray explained that The James Wood Buck Tail was adapted from Pete Perinchief’s boneﬁsh ﬂy, The Horror. The James Wood Bucktail gets its name because its colors match those of a local high school sports team. While I don’t see any resemblance to a baby sunﬁsh when I look at this ﬂy, the ﬁsh certainly have an afﬁnity for it. In its traditional size, it makes a great warm water pattern for bass, pickerel and larger bluegills and crappies. I most often ﬁsh the ﬂy in a size 4 or 6 which can be a little cumbersome to cast on most tenkara rods. Last winter I shrunk the pattern down so it could easily be ﬁshed on a tenkara rod. I had to swap out a few materials to make it work since the original chenille body, and