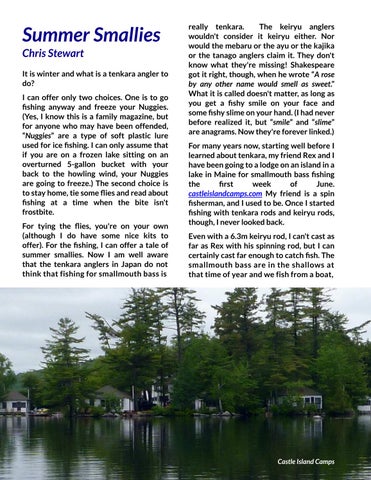 It is winter and what is a tenkara angler to do? I can offer only two choices. One is to go ﬁshing anyway and freeze your Nuggies. (Yes, I know this is a family magazine, but for anyone who may have been offended, “Nuggies” are a type of soft plastic lure used for ice ﬁshing. I can only assume that if you are on a frozen lake sitting on an overturned 5-gallon bucket with your back to the howling wind, your Nuggies are going to freeze.) The second choice is to stay home, tie some ﬂies and read about ﬁshing at a time when the bite isn&#39;t frostbite. For tying the ﬂies, you&#39;re on your own (although I do have some nice kits to offer). For the ﬁshing, I can offer a tale of summer smallies. Now I am well aware that the tenkara anglers in Japan do not think that fishing for smallmouth bass is

really tenkara. The keiryu anglers wouldn&#39;t consider it keiryu either. Nor would the mebaru or the ayu or the kajika or the tanago anglers claim it. They don&#39;t know what they&#39;re missing! Shakespeare got it right, though, when he wrote “A rose by any other name would smell as sweet.” What it is called doesn&#39;t matter, as long as you get a ﬁshy smile on your face and some ﬁshy slime on your hand. (I had never before realized it, but “smile” and “slime” are anagrams. Now they&#39;re forever linked.) For many years now, starting well before I learned about tenkara, my friend Rex and I have been going to a lodge on an island in a lake in Maine for smallmouth bass ﬁshing the ﬁrst week of June. castleislandcamps.com My friend is a spin ﬁsherman, and I used to be. Once I started ﬁshing with tenkara rods and keiryu rods, though, I never looked back. Even with a 6.3m keiryu rod, I can&#39;t cast as far as Rex with his spinning rod, but I can certainly cast far enough to catch ﬁsh. The smallmouth bass are in the shallows at that time of year and we fish from a boat,

Tenkara Angler Magazine chronicles the tenkara lifestyle through entries about community, destination, tactics, gear, and creative essays. A quarterly publication, this is the Winter 2016-17 edition. Fly tying recipes, tips to stay warm on-stream in the winter months, tactics to chase salmon and smallmouth, destination travel, an interview, a discussion on honoring the definition of tenkara, a hat shopping adventure, as well as thoughtful essays and playful art will greet you in this issue. A total of 23 articles over 108 pages awaits your discovery. 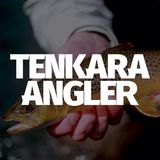