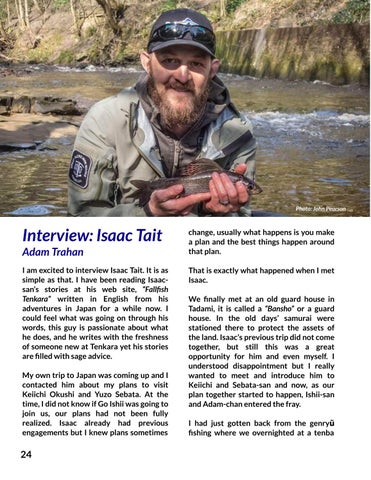 I am excited to interview Isaac Tait. It is as simple as that. I have been reading Isaacsan’s stories at his web site, “Fallﬁsh Tenkara” written in English from his adventures in Japan for a while now. I could feel what was going on through his words, this guy is passionate about what he does, and he writes with the freshness of someone new at Tenkara yet his stories are ﬁlled with sage advice. My own trip to Japan was coming up and I contacted him about my plans to visit Keiichi Okushi and Yuzo Sebata. At the time, I did not know if Go Ishii was going to join us, our plans had not been fully realized. Isaac already had previous engagements but I knew plans sometimes

change, usually what happens is you make a plan and the best things happen around that plan. That is exactly what happened when I met Isaac. We ﬁnally met at an old guard house in Tadami, it is called a “Bansho” or a guard house. In the old days’ samurai were stationed there to protect the assets of the land. Isaac’s previous trip did not come together, but still this was a great opportunity for him and even myself. I understood disappointment but I really wanted to meet and introduce him to Keiichi and Sebata-san and now, as our plan together started to happen, Ishii-san and Adam-chan entered the fray. I had just gotten back from the genryū ﬁshing where we overnighted at a tenba