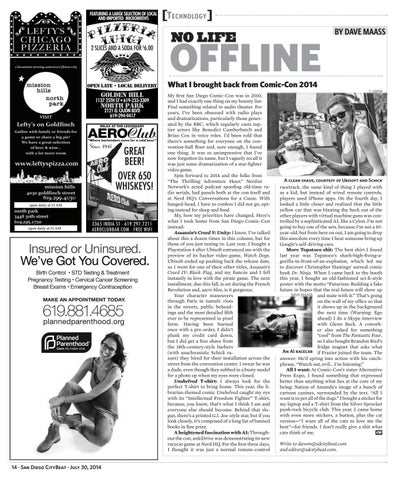 What I brought back from Comic-Con 2014 My first San Diego Comic-Con was in 2010, and I had exactly one thing on my bounty list: Find something related to audio theater. For years, I’ve been obsessed with radio plays and dramatizations, particularly those generated by the BBC, which regularly casts toptier actors like Benedict Cumberbatch and Brian Cox in voice roles. I’d been told that there’s something for everyone on the convention-hall floor and, sure enough, I found one thing. It was so unimpressive that I’ve now forgotten its name, but I vaguely recall it was just some dramatization of a star-fighter video game. Spin forward to 2014 and the folks from “The Thrilling Adventure Hour,” Nerdist Network’s acted podcast spoofing old-time radio serials, had panels both at the con itself and at Nerd HQ’s Conversations for a Cause. With hanged-head, I have to confess I did not go, opting instead for sleep and food. My, how my priorities have changed. Here’s what I took home from San Diego Comic-Con instead: Assassin’s Creed V: Unity: I know, I’ve talked about this a dozen times in this column, but for those of you just tuning in: Last year, I bought a Playstation 4 after Ubisoft entranced me with the preview of its hacker video game, Watch Dogs. Ubisoft ended up pushing back the release date, so I went for one of their other titles, Assassin’s Creed IV: Black Flag, and my fiancée and I fell instantly in love with the pirate game. The next installment, due this fall, is set during the French Revolution and, sacre bleu, is it gorgeous. Your character maneuvers through Paris in tumult: riots in the streets, public beheadings and the most detailed filth ever to be represented in pixel form. Having been burned once with a pre-order, I didn’t plunk my credit card down, but I did get a free shave from the 18th-century-style barbers (with anachronistic Schick razors) they hired for their installation across the street from the convention center. I swear he was a dude, even though they subbed in a busty model for a photo op when my eyes were closed. Unshelved T-shirt: I always look for the perfect T-shirt to bring home. This year, the librarian-themed comic Unshelved caught my eye with its “Intellectual Freedom Fighter” T-shirt, because, you know, that’s what I think I am and everyone else should become. Behind that slogan, there’s a printed G.I. Joe-style star, but if you look closely, it’s composed of a long list of banned books in fine print. A heightened fascination with AI: Throughout the con, ankiDrive was demonstrating its new racecar game at Nerd HQ. For the first three days, I thought it was just a normal remote-control

A clean shave, courtesy of Ubisoft and Schick racetrack, the same kind of thing I played with as a kid, but instead of wired remote controls, players used iPhone apps. On the fourth day, I looked a little closer and realized that the little yellow car that was blasting the heck out of the other players with virtual machine guns was controlled by a sophisticated AI, like a Cylon. I’m not going to buy one of the sets, because I’m not a 10year-old, but from here on out, I am going to drop this anecdote every time I hear someone bring up Google’s self-driving cars. More Topatoco shit: The best shirt I found last year was Topatoco’s shark-high-fiving-agorilla-in-front-of-an-explosion, which led me to discover Christopher Hastings’ surreal comic book Dr. Ninja. When I came back to the booth this year, I bought an old-fashioned sci-fi-style poster with the motto “Futurism: Building a fake future in hopes that the real future will show up Dave Maass and mate with it.” That’s going on the wall of my office so that it shows up in the background the next time (Warning: Ego ahead) I do a Skype interview with Glenn Beck. A coworker also asked for something “cool” from The Fantastic Four, so I also bought Brandon Bird’s fridge magnet that asks what An AI racecar if Frazier joined the team. The answer: He’d spring into action with his catchphrase, “Watch out, evil… I’m listening.” All I want: At Comic-Con’s sister Alternative Press Expo, I found something that expressed better than anything what lies at the core of my being: Nation of Amanda’s image of a bunch of cartoon canines, surrounded by the text, “All I want is to pet all of the dogs.” I bought a sticker for my laptop and a T-shirt from the Silver Sprocket punk-rock bicycle club. This year, I came home with even more stickers, a button, plus the cat version—“I want all of the cats to love me the best”—for friends. I don’t really give a shit what cats think of me. Write to davem@sdcitybeat.com and editor@sdcitybeat.com.