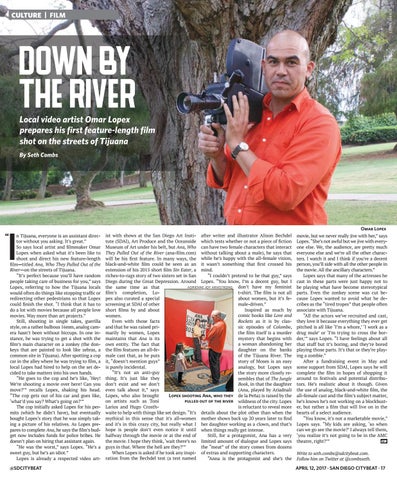 n Tijuana, everyone is an assistant director without you asking. It’s great.” So says local artist and filmmaker Omar Lopex when asked what it’s been like to shoot and direct his new feature-length film—titled Ana, Who They Pulled Out of the River—on the streets of Tijuana. “It’s perfect because you’ll have random people taking care of business for you,” says Lopex, referring to how the Tijuana locals would often do things like stopping traffic or redirecting other pedestrians so that Lopex could finish the shot. “I think that it has to do a lot with movies because all people love movies. Way more than art projects.” Still, shooting in single takes, guerilla style, on a rather bulbous 16mm, analog camera hasn’t been without hiccups. In one instance, he was trying to get a shot with the film’s main character on a zonkey (the donkeys that are painted to look like zebras, a common site in Tijuana). After spotting a cop car in the alley where he was trying to film, a local Lopex had hired to help on the set decided to take matters into his own hands. “He goes to the cop and he’s like, ‘Hey! We’re shooting a movie over here! Can you move?’” recalls Lopex, shaking his head. “The cop gets out of his car and goes like, ‘what’d you say? What’s going on?’” The cop initially asked Lopex for his permits (which he didn’t have), but eventually bought Lopex’s story that he was simply taking a picture of his relatives. As Lopex prepares to complete Ana, he says the film’s budget now includes funds for police bribes. He doesn’t plan on hiring that assistant again. “He was the worst,” says Lopex. “He’s a sweet guy, but he’s an idiot.” Lopex is already a respected video art-

ist with shows at the San Diego Art Insti- after writer and illustrator Alison Bechdel tute (SDAI), Art Produce and the Oceanside which tests whether or not a piece of fiction Museum of Art under his belt, but Ana, Who can have two female characters that interact They Pulled Out of the River (ana-film.com) without talking about a male), he says that will be his first feature. In many ways, the while he’s happy with the all-female vision, black-and-white film could be seen as an it wasn’t something that first crossed his extension of his 2015 short film Sin Eater, a mind. “I couldn’t pretend to be that guy,” says riches-to-rags story of two sisters set in San Diego during the Great Depression. Around Lopex. “You know, I’m a decent guy, but I ADRIENNE JOY ARMSTRONG don’t have my feminist the same time as that t-shirt. The film is not all film’s completion, Loabout women, but it’s fepex also curated a special male-driven.” screening at SDAI of other Inspired as much by short films by and about comic books like Love and women. Rockets as it is by clasEven with those facts sic episodes of Colombo, and that he was raised prithe film itself is a murder marily by women, Lopex mystery that begins with maintains that Ana is its a woman abandoning her own entity. The fact that daughter on the banks the film features an all-feof the Tijuana River. The male cast that, as he puts it, “doesn’t mention guys” story of Moses is an easy is purely incidental. analogy, but Lopex says “It’s not an anti-guy the story more closely rething. It’s just like they sembles that of The Jungle don’t exist and we don’t Book, in that the daughter even talk about it,” says (Ana, played by Ariadnali Lopex, who also brought Lopex shooting Ana, who they de la Peña) is raised by the pulled out of the river wildness of the city. Lopex on artists such as Toni Larios and Hugo Crosthis reluctant to reveal more waite to help with things like set design. “It’s details about the plot other than when the mythical in this sense that it’s all-women mother shows back up 20 years later to find and it’s in this crazy city, but really what I her daughter working as a clown, and that’s hope is people don’t even notice it until when things really get intense. halfway through the movie or at the end of Still, for a protagonist, Ana has a very the movie. I hope they think, ‘wait there’s no limited amount of dialogue and Lopex says guys in that. Where the hell are they?’” the “meat” of the story comes from dozens When Lopex is asked if he took any inspi- of extras and supporting characters. ration from the Bechdel test (a test named “Anna is the protagonist and she’s the

movie, but we never really jive with her,” says Lopex. “She’s not awful but we jive with everyone else. We, the audience, are pretty much everyone else and we’re all the other characters. I watch it and I think if you’re a decent person, you’ll side with all the other people in the movie. All the ancillary characters.” Lopex says that many of the actresses he cast in these parts were just happy not to be playing what have become stereotypical parts. Even the zonkey scene was cut because Lopex wanted to avoid what he decribes as the “tired tropes” that people often associate with Tijuana. “All the actors we’ve recruited and cast, they love it because everything they ever get pitched is all like ‘I’m a whore,’ ‘I work as a drug mule’ or ‘I’m trying to cross the border,’” says Lopex. “I have feelings about all that stuff but it’s boring, and they’re bored playing those parts. It’s that or they’re playing a zombie.” After a fundraising event in May and some support from SDAI, Lopex says he will complete the film in hopes of shopping it around to festivals and potential distributors. He’s realistic about it though. Given the use of analog, black-and-white film, the all-female cast and the film’s subject matter, he’s knows he’s not working on a blockbuster, but rather a film that will live on in the hearts of a select audience. “You know, it’s not a marketable movie,” Lopex says. “My kids are asking, ‘so when can we go see the movie?’ I always tell them, ‘you realize it’s not going to be in the AMC theatre, right?’” Write to seth.combs@sdcitybeat.com. Follow him on Twitter at @combsseth.