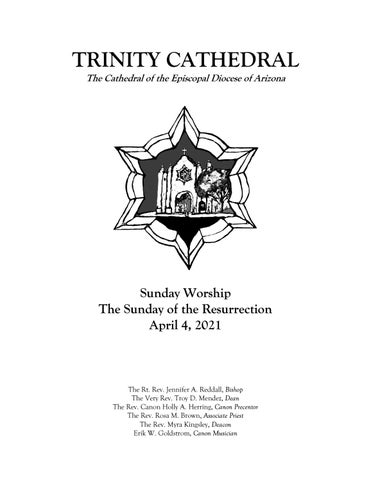 TRINITY CATHEDRAL The Cathedral of the Episcopal Diocese of Arizona

Sunday Worship The Sunday of the Resurrection April 4, 2021

Alleluia! Christ is risen! The Lord is risen indeed! Alleluia!

THE GLORIA IN EXCELSIS

COLLECT OF THE DAY Celebrant

The Lord be with you. And also with you.

Almighty God, who through your only-begotten Son Jesus Christ overcame death and opened to us the gate of everlasting life: Grant that we, who celebrate with joy the day of the Lord's resurrection, may be raised from the death of sin by your life-giving Spirit; through Jesus Christ our Lord, who lives and reigns with you and the Holy Spirit, one God, now and for ever. Amen.

Peter began to speak to Cornelius and the other Gentiles: "I truly understand that God shows no partiality, but in every nation anyone who fears him and does what is right is acceptable to him. You know the message he sent to the people of Israel, preaching peace by Jesus Christ--he is Lord of all. That message spread throughout Judea, beginning in Galilee after the baptism that John announced: how God anointed Jesus of Nazareth with the Holy Spirit and with power; how he went about doing good and healing all who were oppressed by the devil, for God was with him. We are witnesses to all that he did both in Judea and in Jerusalem. They put him to death by hanging him on a tree; but God raised him on the third day and allowed him to appear, not to all the people but to us who were chosen by God as witnesses, and who ate and drank with him after he rose from the dead. He commanded us to preach to the people and to testify that he is the one ordained by God as judge of the living and the dead. All the prophets testify about him that everyone who believes in him receives forgiveness of sins through his name." Reader

The Word of the Lord. Thanks be to God.

Give thanks to the Lord, for he is good; * his mercy endures for ever. 2 Let Israel now proclaim, * "His mercy endures for ever." 14 The Lord is my strength and my song, * and he has become my salvation. 15 There is a sound of exultation and victory * in the tents of the righteous: 16 "The right hand of the Lord has triumphed! * the right hand of the Lord is exalted! the right hand of the Lord has triumphed!" 17 I shall not die, but live, * and declare the works of the Lord. 18 The Lord has punished me sorely, * but he did not hand me over to death. 19 Open for me the gates of righteousness; * I will enter them; I will offer thanks to the Lord. 20 "This is the gate of the Lord; * he who is righteous may enter." 21 I will give thanks to you, for you answered me * and have become my salvation. 22 The same stone which the builders rejected * has become the chief cornerstone. 23 This is the Lord's doing, * and it is marvelous in our eyes. 24 On this day the Lord has acted; * we will rejoice and be glad in it. 3 | P a g e

I would remind you, brothers and sisters, of the good news that I proclaimed to you, which you in turn received, in which also you stand, through which also you are being saved, if you hold firmly to the message that I proclaimed to you--unless you have come to believe in vain. For I handed on to you as of first importance what I in turn had received: that Christ died for our sins in accordance with the scriptures, and that he was buried, and that he was raised on the third day in accordance with the scriptures, and that he appeared to Cephas, then to the twelve. Then he appeared to more than five hundred brothers and sisters at one time, most of whom are still alive, though some have died. Then he appeared to James, then to all the apostles. Last of all, as to one untimely born, he appeared also to me. For I am the least of the apostles, unfit to be called an apostle, because I persecuted the church of God. But by the grace of God I am what I am, and his grace toward me has not been in vain. On the contrary, I worked harder than any of them--though it was not I, but the grace of God that is with me. Whether then it was I or they, so we proclaim and so you have come to believe. Reader

The Word of the Lord. Thanks be to God.

Mark 16:1-8 The Holy Gospel of our Lord Jesus Christ according to Mark. Glory to you, Lord Christ.

When the sabbath was over, Mary Magdalene, and Mary the mother of James, and Salome bought spices, so that they might go and anoint Jesus. And very early on the first day of the week, when the sun had risen, they went to the tomb. They had been saying to one another, “Who will roll away the stone for us from the entrance to the tomb?” When they looked up, they saw that the stone, which was very large, had already been rolled back. As they entered the tomb, they saw a young man, dressed in a white robe, sitting on the right side; and they were alarmed. But he said to them, “Do not be alarmed; you are looking for Jesus of Nazareth, who was crucified. He has been raised; he is not here. Look, there is the place they laid him. But go, tell his disciples and Peter that he is going ahead of you to Galilee; there you will see him, just as he told you.” So they went out and fled from the tomb, for terror and amazement had seized them; and they said nothing to anyone, for they were afraid. Deacon

The Gospel of the Lord. Praise to you, Lord Christ. Celtic Alleluia The Rt. Rev. Jennifer A. Reddall, VI Bishop of Arizona

BCP 358 We believe in one God, the Father, the Almighty, maker of heaven and earth, of all that is, seen and unseen. We believe in one Lord, Jesus Christ, the only Son of God, eternally begotten of the Father, God from God, Light from Light, true God from true God, begotten, not made, of one Being with the Father. Through him all things were made. For us and for our salvation he came down from heaven: by the power of the Holy Spirit he became incarnate from the Virgin Mary, and was made man. For our sake he was crucified under Pontius Pilate; he suffered death and was buried. On the third day he rose again in accordance with the Scriptures; 6 | P a g e

he ascended into heaven and is seated at the right hand of the Father. He will come again in glory to judge the living and the dead, and his kingdom will have no end. We believe in the Holy Spirit, the Lord, the giver of life, who proceeds from the Father and the Son. With the Father and the Son he is worshiped and glorified. He has spoken through the Prophets. We believe in one holy catholic and apostolic Church. We acknowledge one baptism for the forgiveness of sins. We look for the resurrection of the dead, and the life of the world to come. Amen.

THE PRAYERS OF THE PEOPLE Intercessor

I ask your prayers for Health Care Workers, Doctors, Nurses along with those who support the work they do. For those in positions of authority in our city, our State and our Nation that they make wise and humane decisions. For this community that we strive for peace and justice in our daily lives and in the work that God has given us to do. And, for all who serve the nation, especially those in the armed forces. For refugees and all those affected by warfare, civil unrest, and natural disasters. Silence Praise God for those in every generation in whom Christ has been honored. Pray that we may have grace to glorify Christ in our own day. Silence The Celebrant adds a concluding Collect. THE ANTHEM

And now, as our Savior Christ has taught us, we are bold to say,

Our Father, who art in heaven, hallowed be thy Name, thy kingdom come, thy will be done, on earth as it is in heaven. Give us this day our daily bread. And forgive us our trespasses, as we forgive those who trespass against us. And lead us not into temptation, but deliver us from evil. For thine is the kingdom, and the power, and the glory, for ever and ever. Amen.

O Lord, let your mercy be shown upon us; As we put our trust in you. Let us pray. Almighty God, kindle, we pray, in every heart the true love of peace, and guide with your wisdom those who take counsel for the nations of the earth, that in tranquility your dominion may increase until the earth is filled with the knowledge of your love; through Jesus Christ our Lord, who lives and reigns with you, in the unity of the Holy Spirit, one God, now and for ever. Amen. Amen.

The God of peace, who brought again from the dead our Lord Jesus Christ, the great Shepherd of the sheep, through the blood of the everlasting covenant, make you perfect in every good work to do his will, working in you that which is well-pleasing in his sight; and the blessing of God Almighty, the Father, the Son, and the Holy Spirit, be among you, and remain with you always. Amen. 9 | P a g e

The Very Rev. Troy D. Mendez, Dean THE PRAYERS OF THE PEOPLE

Commended to our prayers: Jacque and Frank, Martha, Francis, Phillip and Surya. Birthdays: including Jeff Walker, Kenneth Cook, Beth Medley, Selene & Mia Murillo-Vargas, John Haldiman, and Joan Howell. Anniversaries: William & Cheryl Hamati. Departed this Life: all who have died during this pandemic. Pray for those who have died. Diocesan and Anglican Cycle of Prayer: • Justin, the Archbishop of Canterbury; • Michael, our Presiding Bishop; • Jennifer, our Bishop; • and all bishops, priests, and deacons • The peace of Jerusalem; • All Saint’s in the Desert in Sun City. Community Prayers: • We pray for Health Care Workers, Doctors, Nurses along with those who support the work they do. • For those in positions of authority in our city, our State and our Nation that they make wise and humane decisions. • For this community that we strive for peace and justice in our daily lives and in the work that God has given us to do. • For all who serve the nation, especially those in the armed forces. • And, for refugees and all those affected by warfare, civil unrest, and natural disasters.

TRINITY CATHEDRAL The Cathedral of the Episcopal Diocese of Arizona 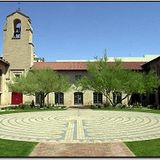