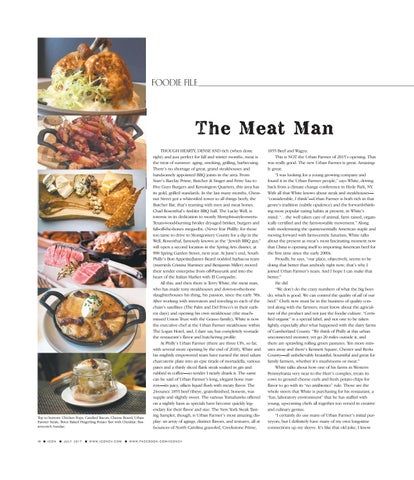 THOUGH HEARTY, DENSE AND rich (when done right) and just perfect for fall and winter months, meat is the treat of summer: aging, smoking, grilling, barbecuing. There’s no shortage of great, grand steakhouses and handsomely appointed BBQ joints in the area. From Starr’s Barclay Prime, Butcher & Singer and Fette Sau to Five Guys Burgers and Kensington Quarters, this area has its gold, grilled standards. In the last many months, Chestnut Street got a white-tiled tower to all things beefy, the Butcher Bar, that’s teaming with men and meat bones. Chad Rosenthal’s Ambler BBQ hall, The Lucky Well, is totemic in its dedication to mostly Memphis-style-meetsTexan-wood-burning broiler dry-aged brisket, burgers and fall-off-the-bones mega-ribs. (Never fear Phillly; for those too tame to drive to Montgomery County for a dip in the Well, Rosenthal, famously known as the “Jewish BBQ guy,” will open a second location in the Spring Arts district, at 990 Spring Garden Street, next year. At June’s end, South Philly’s Bon Appetite/James Beard nodded barbacoa team (marrieds Cristina Martinez and Benjamin Miller) moved their tender enterprise from off-Passyunk and into the heart of the Italian Market with El Compadre. All this, and then there is Terry White, the meat man, who has made tony steakhouses and down-to-the-bone slaughterhouses his thing, his passion, since the early ’90s. After working with innovators and traveling to each of the chain’s satellites (The Palm and Del Frisco’s in their earliest days) and opening his own steakhouse (the muchmissed Union Trust with the Grasso family), White is now the executive chef at the Urban Farmer steakhouse within The Logan Hotel, and, I dare say, has completely re-made the restaurant’s flavor and butchering profile. At Philly’s Urban Farmer (there are three UFs, so far, with several more opening by the end of 2018), White and his mightily empowered team have turned the tired salum charcuterie plate into an epic tirade of mortadella, various pates and a thinly sliced flank steak soaked in gin and rubbed in coffee—so tender I nearly drank it. The same can be said of Urban Farmer’s long, elegant bone marrow—its juicy, silken liquid flush with meaty flavor. The 24-ounce 1855 beef ribeye, grain-finished, bone-in, was supple and slightly sweet. The various Tomahawks offered on a nightly basis as specials have become quickly legendary for their flavor and size. The New York Steak Tasting Sampler, though, is Urban Farmer’s most amazing display: an array of agings, distinct flavors, and textures, all at 6-ounces of North Carolina grass-fed, Creekstone Prime,

1855 Beef and Wagyu. This is NOT the Urban Farmer of 2015’s opening. That was really good. The new Urban Farmer is great. Amazingly great. “I was looking for a young growing company and found it in the Urban Farmer people,” says White, driving back from a climate change conference in Hyde Park, NY. With all that White knows about steak and steakhouses— “considerable, I think”—Urban Farmer is both rich in that genre’s tradition (subtle opulence) and the forward-thinking most popular eating habits at present, in White’s mind: “…the well taken care of animal, farm raised, organically certified and the farm-to-table movement.” Along with modernizing the quintessentially American staple and moving forward with farm-centric futurism, White talks about the present as meat’s most fascinating moment now that China is opening itself to importing American beef for the first time since the early 2000s. Proudly, he says, “our place, objectively, seems to be doing that better than anybody right now; that’s why I joined Urban Farmer’s team. And I hope I can make that better.” He did “We don’t do the crazy numbers of what the big boys do, which is good. We can control the quality of all of our beef.” Chefs now must be in the business of quality control along with the farmers; must know about the agriculture of the product and not just the foodie culture. “Certified organic” is a special label, and not one to be taken lightly, especially after what happened with the dairy farms of Cumberland County. “We think of Philly at this urban unconnected monster, yet go 20 miles outside it, and there are sprawling rolling green pastures. Ten more minutes away and there’s Kennett Square, Chester and Berks County—all unbelievably beautiful, bountiful and great for family farmers, whether it’s mushrooms or meat.” White talks about how one of his farms in Western Pennsylvania very near to the Herr’s complex, treats its cows to ground cheese curls and fresh potato chips for flavor to go with its “no antibiotics” rule. Those are the whole steers that White is purchasing for his restaurant, a “fun, laboratory environment” that he has staffed with young, up-coming chefs all together too versed in creative and culinary genius. “I certainly do use many of Urban Farmer’s initial purveyors, but I definitely have many of my own long-time connections up my sleeve. It’s like that old joke, I know ICON, a sophisticated yet unpretentious, quirky yet serious, cultural magazine with a focus on entertainment, fine and performing arts, musi...

ICON, a sophisticated yet unpretentious, quirky yet serious, cultural magazine with a focus on entertainment, fine and performing arts, musi...