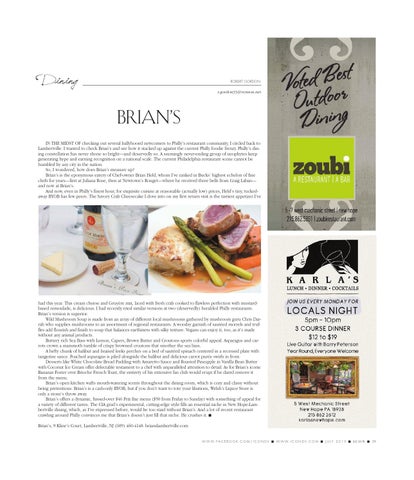 BRIAN’S IN THE MIDST OF checking out several ballyhooed newcomers to Philly’s restaurant community, I circled back to Lambertville. I wanted to check Brian’s and see how it stacked up against the current Philly foodie frenzy. Philly’s dining constellation has never shone so bright—and deservedly so. A seemingly never-ending group of neophytes keep generating hype and earning recognition on a national scale. The current Philadelphia restaurant scene cannot be humbled by any city in the nation. So, I wondered, how does Brian’s measure up? Brian’s is the eponymous eatery of Chef-owner Brian Held, whom I’ve ranked in Bucks’ highest echelon of fine chefs for years—first at Juliana Rose, then at Newtown’s Rouget—where he received three bells from Craig Laban— and now at Brian’s. And now, even in Philly’s finest hour, for exquisite cuisine at reasonable (actually low) prices, Held’s tiny, tuckedaway BYOB has few peers. The Savory Crab Cheesecake I dove into on my first return visit is the tastiest appetizer I’ve

had this year. This cream cheese and Gruyère mix, laced with fresh crab cooked to flawless perfection with mustardbased remoulade, is delicious. I had recently tried similar versions at two (deservedly) heralded Philly restaurants. Brian’s version is superior. Wild Mushroom Soup is made from an array of different local mushrooms gathered by mushroom guru Chris Darrah who supplies mushrooms to an assortment of regional restaurants. A woodsy garnish of sautéed morrels and truffles add flourish and finish to soup that balances earthiness with silky texture. Vegans can enjoy it, too, as it’s made without any animal products. Buttery rich Sea Bass with Lemon, Capers, Brown Butter and Croutons sports colorful appeal. Asparagus and carrots crown a mammoth tumble of crispy browned croutons that smother the sea bass. A hefty chunk of halibut and braised leeks perches on a bed of sautéed spinach centered in a recessed plate with tangerine sauce. Poached asparagus is piled alongside the halibut and delicious carrot purée swirls in front. Desserts like White Chocolate Bread Pudding with Amaretto Sauce and Roasted Pineapple in Vanilla Bean Butter with Coconut Ice Cream offer delectable testament to a chef with unparalleled attention to detail. As for Brian’s iconic Bananas Foster over Brioche French Toast, the entirety of his extensive fan club would erupt if he dared remove it from the menu. Brian’s open kitchen wafts mouth-watering scents throughout the dining room, which is cozy and classy without being pretentious. Brian’s is a cash-only BYOB, but if you don’t want to tote your libations, Welsh’s Liquor Store is only a stone’s throw away. Brian’s offers a dynamic, fussed-over $46 Prix fixe menu ($50 from Friday to Sunday) with something of appeal for a variety of different tastes. The CIA grad’s experimental, cutting-edge style fills an essential niche in New Hope-Lambertville dining, which, as I’ve expressed before, would be too staid without Brian’s. And a lot of recent restaurant crawling around Philly convinces me that Brian’s doesn’t just fill that niche. He crushes it. ■ Brian’s, 9 Kline’s Court, Lambertville, NJ (609) 460-4148. brianslambertville.com

ICON is a sophisticated yet unpretentious, quirky yet serious, cultural monthly magazine with a focus on fine and performing arts, music and film reviews, dining, and exclusive interviews with world famous celebrities in film and music. ICON is circulated throughout Philadelphia, Central Bucks, all of Lehigh Valley and Hunterdon County, NJ. ICON has been continuously published since 1992.