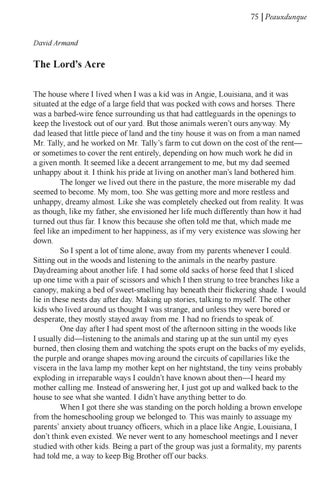 The Lord’s Acre The house where I lived when I was a kid was in Angie, Louisiana, and it was situated at the edge of a large field that was pocked with cows and horses. There was a barbed-wire fence surrounding us that had cattleguards in the openings to keep the livestock out of our yard. But those animals weren’t ours anyway. My dad leased that little piece of land and the tiny house it was on from a man named Mr. Tally, and he worked on Mr. Tally’s farm to cut down on the cost of the rent— or sometimes to cover the rent entirely, depending on how much work he did in a given month. It seemed like a decent arrangement to me, but my dad seemed unhappy about it. I think his pride at living on another man’s land bothered him. The longer we lived out there in the pasture, the more miserable my dad seemed to become. My mom, too. She was getting more and more restless and unhappy, dreamy almost. Like she was completely checked out from reality. It was as though, like my father, she envisioned her life much differently than how it had turned out thus far. I know this because she often told me that, which made me feel like an impediment to her happiness, as if my very existence was slowing her down. So I spent a lot of time alone, away from my parents whenever I could. Sitting out in the woods and listening to the animals in the nearby pasture. Daydreaming about another life. I had some old sacks of horse feed that I sliced up one time with a pair of scissors and which I then strung to tree branches like a canopy, making a bed of sweet-smelling hay beneath their flickering shade. I would lie in these nests day after day. Making up stories, talking to myself. The other kids who lived around us thought I was strange, and unless they were bored or desperate, they mostly stayed away from me. I had no friends to speak of. One day after I had spent most of the afternoon sitting in the woods like I usually did—listening to the animals and staring up at the sun until my eyes burned, then closing them and watching the spots erupt on the backs of my eyelids, the purple and orange shapes moving around the circuits of capillaries like the viscera in the lava lamp my mother kept on her nightstand, the tiny veins probably exploding in irreparable ways I couldn’t have known about then—I heard my mother calling me. Instead of answering her, I just got up and walked back to the house to see what she wanted. I didn’t have anything better to do. When I got there she was standing on the porch holding a brown envelope from the homeschooling group we belonged to. This was mainly to assuage my parents’ anxiety about truancy officers, which in a place like Angie, Louisiana, I don’t think even existed. We never went to any homeschool meetings and I never studied with other kids. Being a part of the group was just a formality, my parents had told me, a way to keep Big Brother off our backs.

The first journal of stories and poems from Peauxdunque Review 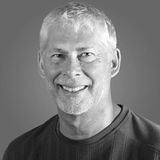