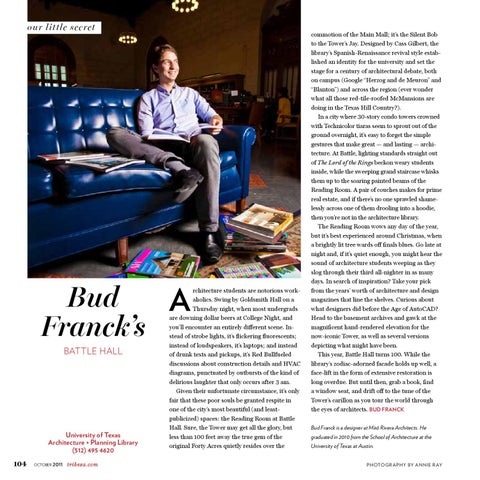 rchitecture students are notorious workaholics. Swing by Goldsmith Hall on a Thursday night, when most undergrads are downing dollar beers at College Night, and you’ll encounter an entirely different scene. Instead of strobe lights, it’s flickering fluorescents; instead of loudspeakers, it’s laptops; and instead of drunk texts and pickups, it’s Red Bullfueled discussions about construction details and HVAC diagrams, punctuated by outbursts of the kind of delirious laughter that only occurs after 3 am. Given their unfortunate circumstance, it’s only fair that these poor souls be granted respite in one of the city’s most beautiful (and leastpublicized) spaces: the Reading Room at Battle Hall. Sure, the Tower may get all the glory, but less than 100 feet away the true gem of the original Forty Acres quietly resides over the

commotion of the Main Mall; it’s the Silent Bob to the Tower’s Jay. Designed by Cass Gilbert, the library’s Spanish-Renaissance revival style established an identity for the university and set the stage for a century of architectural debate, both on campus (Google “Herzog and de Meuron” and “Blanton”) and across the region (ever wonder what all those red-tile-roofed McMansions are doing in the Texas Hill Country?). In a city where 30-story condo towers crowned with Technicolor tiaras seem to sprout out of the ground overnight, it’s easy to forget the simple gestures that make great — and lasting — architecture. At Battle, lighting standards straight out of The Lord of the Rings beckon weary students inside, while the sweeping grand staircase whisks them up to the soaring painted beams of the Reading Room. A pair of couches makes for prime real estate, and if there’s no one sprawled shamelessly across one of them drooling into a hoodie, then you’re not in the architecture library. The Reading Room wows any day of the year, but it’s best experienced around Christmas, when a brightly lit tree wards off finals blues. Go late at night and, if it’s quiet enough, you might hear the sound of architecture students weeping as they slog through their third all-nighter in as many days. In search of inspiration? Take your pick from the years’ worth of architecture and design magazines that line the shelves. Curious about what designers did before the Age of AutoCAD? Head to the basement archives and gawk at the magnificent hand-rendered elevation for the now-iconic Tower, as well as several versions depicting what might have been. This year, Battle Hall turns 100. While the library’s zodiac-adorned facade holds up well, a face-lift in the form of extensive restoration is long overdue. But until then, grab a book, find a window seat, and drift off to the tune of the Tower’s carillon as you tour the world through the eyes of architects. bud franck Bud Franck is a designer at Miró Rivera Architects. He graduated in 2010 from the School of Architecture at the University of Texas at Austin. P h oto g r a p h y by a n n i e r ay 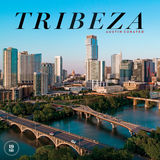 it was impossible not to be inspired by our surroundings at the photo shootfor the home spotlighted on this month’s cover and in the feature...

it was impossible not to be inspired by our surroundings at the photo shootfor the home spotlighted on this month’s cover and in the feature...