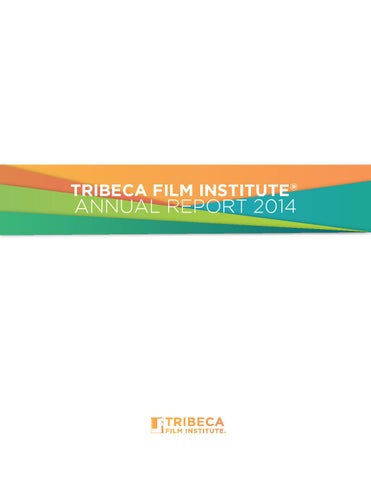 2014 AS SEEN BY OUR CO-CHAIR ooking back at 2014, I am struck by the level of increased visibility and recognition achieved by TFI-supported storytellers. From high school student and Tribeca Film Fellow® Grace McLeod, who earned national notice with a feature in The New York Times and a proﬁle on NPR related to her ﬁlm, UNDER THE TABLE, to screenwriter Graham Moore, who received the Academy Award® for Best Adapted Screenplay for THE IMITATION GAME, the storytellers we champion rose to amazing heights. We couldn’t be more proud. NAS: TIME IS ILLMATIC – the incredible documentary about hip hop artist Nasir “Nas” Jones – opened the Tribeca Film Festival® this year, which marked the ﬁrst (but certainly not the last) time that a TFI-supported ﬁlm was selected for this prestigious honor. But what does all of this really mean? Why is it important? We believe ensuring that a plurality of stories and voices reach as many people as possible is vital. In his Oscar® acceptance speech, Graham Moore movingly shared that, as a teenager, he’d attempted suicide because he felt “weird” and “different” and like he “did not belong.” He encouraged young people watching the broadcast to stay “weird” and “different” and assured them that they do belong – that their voices and their stories matter. And they do. Every story has the potential to inspire, to challenge, to transform. Ram Devineni’s augmented reality comic book, PRIYA’S SHAKTI, which is teaching young people in India to break from customs that turn a blind eye to violence against women, has exploded in the press (more than 400 media stories worldwide) and has been lauded by the United Nations as an incredibly effective tool for changing – and saving – lives. At TFI, we strive not only to identify the next generation of exceptional storytellers but also to ensure that their stories are realized and reaching audiences to maximum effect. Many of these projects would not happen without our grants and year-round mentoring. So we are tremendously appreciative for the support of our corporate and foundation partners and our individual donors, who generously allow us the privilege of doing this work. We are deeply committed to artists and audiences. We look ahead with great enthusiasm.

THROUGH ALL TFI’S ARTIST PROGRAMS / 135 STORYTELLERS SUPPORTED 13,000+ THROUGH

SPONSORS CONTRIBUTORS BOARD OF DIRECTORS STAFF 4

GRACE MCLEOD Director of UNDER THE TABLE

ribeca Film Fellow Grace McLeod had a momentous 2014 through her involvement with the program and TFI. Her scripted short UNDER THE TABLE tells the story of a young woman bringing her girlfriend home to her estranged Upper East Side family for Thanksgiving after her ﬁrst semester of college. After the ﬁlm premiered at the Tribeca Film Festival, McLeodwas proﬁled in The New York Times and NPR. Further; In April 2014, she, along with other Film Fellows, screened “Local/Express,” a 2-minute-40-second original silent short, on 40 electronic billboards in Times Square.

"The goals are to challenge deeply rooted patriarchal views and create empathy and identiﬁcation with rape survivors – so they feel comfortable seeking justice and begin the process of healing." am Devineni exempliﬁes social-justice storytelling. He is the Producer, Director, and Co-Writer of PRIYA’S SHAKTI, an augmented reality comic book that challenges gender-based sexual violence in India and around the world. Supported by the TFI New Media Fund (an initiative made possible by Ford Foundation), PRIYA’S SHAKTI tells the story of a young woman named Priya, a gang-rape survivor, who is ostracized by her family, and the Goddess Parvati as they ﬁght against gender crimes. Following TFI’s catalytic grant in 2014, PRIYA’S SHAKTI has been featured in more than 400 media stories worldwide and at TFI Interactive as part of the Tribeca Film Festival.

ONE9 & ERIK PARKER Director, Producer, and Writer of NAS: TIME IS ILLMATIC

ilmmakers One9 and Erik Parker were awarded a Tribeca All Access® grant in March 2013 as they were ﬁnishing production on their documentary NAS: TIME IS ILLMATIC. After attending the industry market that TFI hosts for its grantees each year during the Tribeca Film Festival, they applied for and received a TAA Alumni grant in 2014 to help with ﬁnal edits. With TFI as their champion, their ﬁlm was selected as the Opening Night ﬁlm at the 2014 Tribeca Film Festival, marking the ﬁrst time a TFI-funded ﬁlm secured that coveted spot. TFI’s Education team has since written a study guide to accompany the ﬁlm and has hosted screenings and discussions for public school students and prison inmates.

Writer of THE IMITATION GAME

“If this ﬁlm can resituate him [Alan Turing] as one of the great geniuses of the 20th century, that is our small part, our little bit of work that we can do to give his legacy the tribute that it deserves.”

reaction he encountered while pitching his idea for a movie about Alan Turing, the mathematician who cracked the Nazi Enigma code during World War II. Undeterred, Moore applied to the TFI Sloan Filmmaker Fund and received a grant to write THE IMITATION GAME. Moore's script, which blends Turing’s heroic efforts with his secret (then-illegal) life as a gay man in the UK, went on to earn eight Academy Award nominations. Moore took home the Oscar® for Best Adapted Screenplay and delivered one of the most memorable acceptance speeches of the 87th Academy Awards®, in which he revealed that he attempted suicide at age 16.

brought together media artists, technologists, and designers to create new interactive prototypes based on the theme of mobile storytelling. Since Tribeca Hacks ďŹ rst launched in 2012, TFI has held more than 30 different hackathons across the US as well as in France, Germany, Israel, and Switzerland.

aura Alsum of UCLA won the 2014 Sloan Student Grand Jury Prize for her screenplay SURVIVAL OF THE FITTEST. Created with support

from the Alfred P. Sloan Foundation, the Prize recognizes the most outstanding science- and technology-related screenplays from the Sloan ďŹ lm school symposium: UCLA School of Theater, Film, and Television; USC School of Cinematic Arts; NYU Tisch School of the Arts; AFI Conservatory; Carnegie Mellon University School of Drama; and Columbia University School of the Arts. TFI awarded Alsum a $30,000 cash prize as well as an additional $20,000 in professional services for the development of her screenplay, which follows a young athletic boy named Charlie who reinvents his persona at school after being diagnosed with a progressive neuromuscular disease.

THE PARTNERS THAT MAKE OUR WORK POSSIBLE

ALA AND RALPH ISHAM

MAY ELLEN AND GERALD RITTER

THE ORCHARD SAVE THE STARFISH FOUNDATION

NATIONAL ENDOWMENT FOR THE HUMANITIES 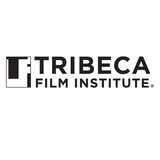