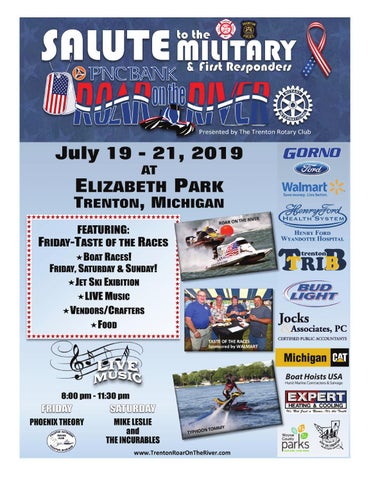 69th “Roar” will emphasize what it has always done best

Now heading into the 69th year of its existence, the Roar on the River has long been established as one of the landmark summer events in Downriver. From July 19-21, the Roar will return to Elizabeth Park in Trenton and there will be a blend of returning fan favorite events and some new additions that are likely to

entertain the crowd. Ronnie Jacek Ruelle, the director of the Taste of the Races, is looking forward to the Friday Night Party, which will feature many of the region’s best restaurants, a show by Typhoon Tommy and a concert from festival-favorite Phoenix Theory. “We have approximately 30 restaurants this year, with

many of the restaurants from last year coming back again,” Ruelle said. “We do have some new ones though, like The Quad in Trenton that hasn’t yet opened for business. We really think we’ve put together a great group of restaurants and it should help make the Friday Night Party a great night.” The entertainment is going to take on a new

look, too, noted Paul Jocks, the Roar’s director of administration. Rather than a stage setup for the bands on Friday and Saturday night, the live music will take place right inside the tents — a move that will give the event a more intimate setting. “The event is going to look different in that the musical entertainment is going to take place under the big tents that we set

up rather than on the stage. The Friday Night Party has always been popular so in many ways it is remaining the same, but we think this will be a welcomed change of pace.” This move was one of several minor changes made throughout the planning process, but event organizers didn’t want to necessarily reinvent the wheel when organizing this year’s Roar. This year, the last that Trenton Rotary will serve as the primary organizers, was one that will hopefully serve as a platform for the future. “The Rotary’s involvement has not changed much at all for this year’s event,” Jocks said. “Rotary is continuing this year as a presenting sponsor, so the planning process and the involvement of Rotary has been basically the same as it has always been. The change has been with the planning for the future of the Roar on the River and helping with the transition to

bring in more outside involvement in the planning and organizing process. We held a planning meeting in May to identify what steps we could take to transition the Roar on the River to the next phase, but this year should look a lot like last year.” The theme of last year’s event in many ways exemplifies the shift in this year’s event, as last year saw a Salute to the Military. This year is much the same, but they have also added a Salute

to First Responders as well, helping to build on a successful showing last year. “Our theme this year is dedicated to Military and First Responders and it’s going to expand on some of the things we did last year,” Jocks said. “We’re looking at being more involved with Victory Gym and their members to participate with them. Chad Rossow, the president of Victory Gym and a member of the executive committee for the Roar, played a key role in the committee this year.” “With the Salute to the Military and First Responders this year, we’re really looking to take the next step as far as the theme.” Ruelle said. “We’re going to have veterans and first responders recognized at the opening ceremony and we’re adding a few different elements that will be tailored toward them. It was so well received last year and it’s a great way to show appreciation to those that served our country, so we

wanted to continue on.” Along with the live entertainment from bands, longtime-favorite Typhoon Tommy Nuttall, the Taste of the Races and a host of other activities available throughout the weekend, the races themselves are shaping up to be as entertaining as ever. Seven racers from the Pro Tunnel One and Pro Tunnel Two series of the Powerboat Nationals organization are from Michigan, including one from Trenton — Leland Broge.

See TrentonRoarOnTheRiver.com For complete details. All times subject to change due to race course and weather conditions.

It’s Not Just a Name...It’s the Truth

PROUD HOME OF THE

The Trenton Rotary Club graciously thanks the following businesses, organizations and individuals for supporting the 69th annual PNC Roar on the River. A Serendipity Cakery Allegra

Whiskeys on the River

Call us for details on our teeth whitening specials!

committee leaders, sponsors and volunteers to help make the event a success each year. To get involved, call Paul Jocks at (734) 675-0266.

Available FREE all over town!

Proud to support the Trenton Rotary and the work they do in our community!

It’s easy to become a member… a great place to save, borrow and invest… call or visit us today.

Visit us at: www.trentontrib.com for regular news updates and a full list of locations where our paper can be found. 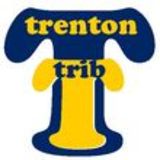 A complete guide to the 69th running of the PNC Roar on the River, an outboard powerboat-racing event on the the Detroit River along the sho...

A complete guide to the 69th running of the PNC Roar on the River, an outboard powerboat-racing event on the the Detroit River along the sho...