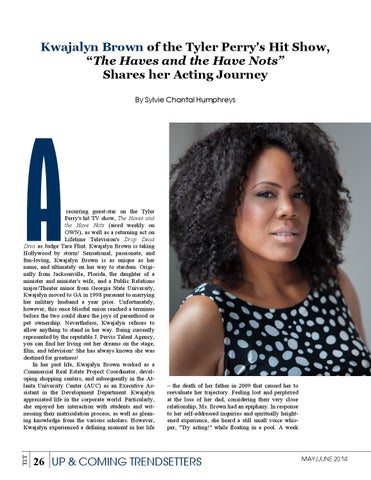 Kwajalyn Brown of the Tyler Perry&#39;s Hit Show, “The Haves and the Have Nots” Shares her Acting Journey By Sylvie Chantal Humphreys

recurring guest-star on the Tyler Perry&#39;s hit TV show, The Haves and the Have Nots (aired weekly on OWN), as well as a returning act on Lifetime Television&#39;s Drop Dead Diva as Judge Tara Flint, Kwajalyn Brown is taking Hollywood by storm! Sensational, passionate, and fun-loving, Kwajalyn Brown is as unique as her name, and ultimately on her way to stardom. Originally from Jacksonville, Florida, the daughter of a minister and minister&#39;s wife, and a Public Relations major/Theater minor from Georgia State University, Kwajalyn moved to GA in 1998 pursuant to marrying her military husband a year prior. Unfortunately, however, this once blissful union reached a terminus before the two could share the joys of parenthood or pet ownership. Nevertheless, Kwajalyn refuses to allow anything to stand in her way. Being currently represented by the reputable J. Pervis Talent Agency, you can find her living out her dreams on the stage, film, and television! She has always known she was destined for greatness! In her past life, Kwajalyn Brown worked as a Commercial Real Estate Project Coordinator, developing shopping centers, and subsequently in the Atlanta University Center (AUC) as an Executive Assistant in the Development Department. Kwajalyn appreciated life in the corporate world. Particularly, she enjoyed her interaction with students and witnessing their matriculation process, as well as gleaning knowledge from the various scholars. However, Kwajalyn experienced a defining moment in her life

– the death of her father in 2009 that caused her to reevaluate her trajectory. Feeling lost and perplexed at the loss of her dad, considering their very close relationship, Ms. Brown had an epiphany. In response to her self-addressed inquiries and spiritually heightened experience, she heard a still small voice whisper, &quot;Try acting!&quot; while floating in a pool. A week 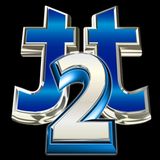