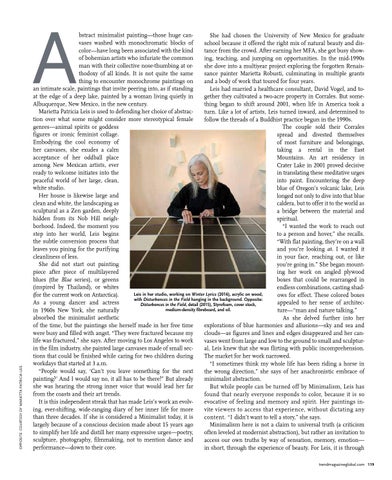 OPPOSITE: COURTESY OF MARIETTA PATRICIA LEIS

bstract minimalist painting—those huge canShe had chosen the University of New Mexico for graduate vases washed with monochromatic blocks of school because it offered the right mix of natural beauty and discolor—have long been associated with the kind tance from the crowd. After earning her MFA, she got busy showof bohemian artists who infuriate the common ing, teaching, and jumping on opportunities. In the mid-1990s man with their collective nose-thumbing at orshe dove into a multiyear project exploring the forgotten Renaisthodoxy of all kinds. It is not quite the same sance painter Marietta Robusti, culminating in multiple grants thing to encounter monochrome paintings on and a body of work that toured for four years. an intimate scale, paintings that invite peering into, as if standing Leis had married a healthcare consultant, David Vogel, and toat the edge of a deep lake, painted by a woman living quietly in gether they cultivated a two-acre property in Corrales. But someAlbuquerque, New Mexico, in the new century. thing began to shift around 2001, when life in America took a Marietta Patricia Leis is used to defending her choice of abstracturn. Like a lot of artists, Leis turned inward, and determined to tion over what some might consider more stereotypical female follow the threads of a Buddhist practice begun in the 1990s. genres—animal spirits or goddess The couple sold their Corrales figures or ironic feminist collage. spread and divested themselves Embodying the cool economy of of most furniture and belongings, her canvases, she exudes a calm taking a rental in the East acceptance of her oddball place Mountains. An art residency in among New Mexican artists, ever Crater Lake in 2001 proved decisive ready to welcome initiates into the in translating these meditative urges peaceful world of her large, clean, into paint. Encountering the deep white studio. blue of Oregon’s volcanic lake, Leis Her house is likewise large and longed not only to dive into that blue clean and white, the landscaping as caldera, but to offer it to the world as sculptural as a Zen garden, deeply a bridge between the material and hidden from its Nob Hill neighspiritual. borhood. Indeed, the moment you “I wanted the work to reach out step into her world, Leis begins to a person and hover,” she recalls. the subtle conversion process that “With flat painting, they’re on a wall leaves you pining for the purifying and you’re looking at. I wanted it cleanliness of less. in your face, reaching out, or like She did not start out painting you’re going in.” She began mountpiece after piece of multilayered ing her work on angled plywood blues (the Blue series), or greens boxes that could be rearranged in (inspired by Thailand), or whites endless combinations, casting shadLeis in her studio, working on Winter Lyrics (2016), acrylic on wood, (for the current work on Antarctica). ows for effect. These colored boxes with Disturbances in the Field hanging in the background. Opposite: As a young dancer and actress appealed to her sense of architecDisturbances in the Field, detail (2015), Styrofoam, cover stock, medium-density fibreboard, and oil. in 1960s New York, she naturally ture—“man and nature talking.” absorbed the minimalist aesthetic As she delved further into her of the time, but the paintings she herself made in her free time explorations of blue harmonies and allusions—sky and sea and were busy and filled with angst. “They were fractured because my clouds—as figures and lines and edges disappeared and her canlife was fractured,” she says. After moving to Los Angeles to work vases went from large and low to the ground to small and sculpturin the film industry, she painted large canvases made of small secal, Leis knew that she was flirting with public incomprehension. tions that could be finished while caring for two children during The market for her work narrowed. workdays that started at 3 a.m. “I sometimes think my whole life has been riding a horse in “People would say, ‘Can’t you leave something for the next the wrong direction,” she says of her anachronistic embrace of painting?’ And I would say no, it all has to be there!” But already minimalist abstraction. she was hearing the strong inner voice that would lead her far But while people can be turned off by Minimalism, Leis has from the coasts and their art trends. found that nearly everyone responds to color, because it is so It is this independent streak that has made Leis’s work an evolvevocative of feeling and memory and spirit. Her paintings ining, ever-shifting, wide-ranging diary of her inner life for more vite viewers to access that experience, without dictating any than three decades. If she is considered a Minimalist today, it is content. “I didn’t want to tell a story,” she says. largely because of a conscious decision made about 15 years ago Minimalism here is not a claim to universal truth (a criticism to simplify her life and distill her many expressive urges—poetry, often leveled at modernist abstraction), but rather an invitation to sculpture, photography, filmmaking, not to mention dance and access our own truths by way of sensation, memory, emotion— performance—down to their core. in short, through the experience of beauty. For Leis, it is through trendmagazineglobal.com 119 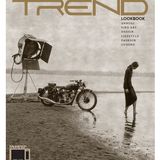