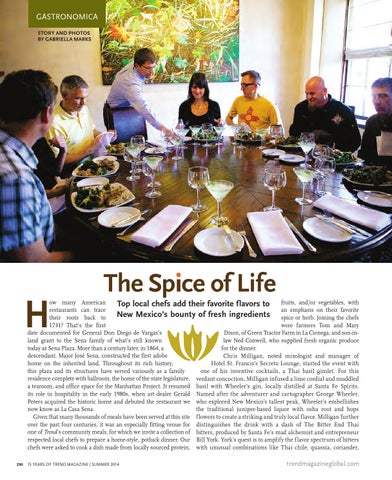 The Spice of Life

ow many American Top local chefs add their favorite flavors to fruits, and/or vegetables, with restaurants can trace an emphasis on their favorite New Mexico’s bounty of fresh ingredients spice or herb. Joining the chefs their roots back to 1731? That’s the first were farmers Tom and Mary date documented for General Don Diego de Vargas’s Dixon, of Green Tractor Farm in La Cienega, and son-inland grant to the Sena family of what’s still known law Ned Conwell, who supplied fresh organic produce today as Sena Plaza. More than a century later, in 1864, a for the dinner. descendant, Major José Sena, constructed the first adobe Chris Milligan, noted mixologist and manager of home on the inherited land. Throughout its rich history, Hotel St. Francis’s Secreto Lounge, started the event with this plaza and its structures have served variously as a family one of his inventive cocktails, a Thai basil gimlet. For this residence complete with ballroom, the home of the state legislature, verdant concoction, Milligan infused a lime cordial and muddled a tearoom, and office space for the Manhattan Project. It resumed basil with Wheeler’s gin, locally distilled at Santa Fe Spirits. its role in hospitality in the early 1980s, when art dealer Gerald Named after the adventurer and cartographer George Wheeler, Peters acquired the historic home and debuted the restaurant we who explored New Mexico’s tallest peak, Wheeler’s embellishes now know as La Casa Sena. the traditional juniper-based liquor with osha root and hops Given that many thousands of meals have been served at this site f lowers to create a striking and truly local f lavor. Milligan further over the past four centuries, it was an especially fitting venue for distinguishes the drink with a dash of The Bitter End Thai one of Trend’s community meals, for which we invite a collection of bitters, produced by Santa Fe’s mad alchemist and entrepreneur respected local chefs to prepare a home-style, potluck dinner. Our Bill York. York’s quest is to amplify the f lavor spectrum of bitters chefs were asked to cook a dish made from locally sourced protein, with unusual combinations like Thai chile, quassia, coriander,