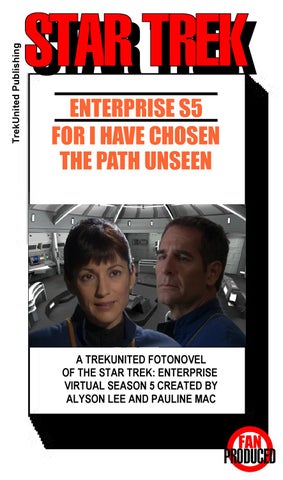 ENTERPRISE S5 FOR I HAVE CHOSEN THE PATH UNSEEN

Based on an original outline for a fanproduced Enterprise season 5 by Thomas Moore, Alyson Lee and Pauline Mac - two TrekUnited members - have created a growing number of videos using original scripts along with existing screencaps and music, to continue the adventures of the Enterprise NX-01

As a homage to the fotonovels of the 70's and 80's, here for the first time in nearly thirty years is a Star Trek 'Fotonovel' produced for fans, by fans!

Episode 1 For I have Chosen The Path Unseen

To talk about this book and to find more great Star Trek fan fiction join us on the TrekUnited forum at www.trekunited.com

Introduction Kirok of L'Stok Modern society has a love / hate relationship with comic books and graphic novel. Chris Couch in his exhaustive and scholarly The Publication and Formats of Comics, Graphic Novels, and Tankobon1, draws a cultural distinction between comic strips and comic books. "...Comic strips were and remain superior in tacit cultural hierarchies to comic books. Comic strips are associated with journalism, family readership, and publication in books and sale in bookstores. Comic books are associated with sensationalism, child and adolescent readership, and sale on newsstands. Although now 1 Image [&] Narrative, December 2000 tp://www.imageandnarrative.be/inarchive/narratology/chriscouch.htm

eighty percent of comic books are sold in comic book shops, the public perception of such stores is perhaps even less positive than that of newsstands." Times change and so do attitudes. Americans, perhaps influenced by the European and Asian experience, accepted comics as a legitimate form or literary media with the creation of the graphic novel, a term coined by Will Eisner in 1978. Telling a story in a graphic form accompanied by text has a much different history in Japan, where it developed into Manga, and on the continent, where comics, or albums, were equally acceptable if made for the media or previously published in magazines and newspapers. Publications that use photos, most usually screencaptures from a film or TV screenplay, are a popular item in Europe that only broke on the American market just as they became outdated by the ability of the public to record TV and watch films on video cassette recorders. Known in English as photonovels,2 fotonovelas or fotonovels, they were known in Italian as fotoromanzi3 although they are sometimes referred to in the States by the term Fumetti which actually refers to all comics. Star Trek has a particular connection with fotonovels. Twelve episodes of The Original Series were published in this format between 1977 â&#x20AC;&#x201C; 1978 followed by Star Trek: The Motion Picture and The Wrath Of Khan in 1980 and 19824. The photonovel you are reading today sprang from 2 Wikipedia http://en.wikipedia.org/wiki/Photonovel 3 Wikipedia http://en.wikipedia.org/wiki/Fumetti

a request by me last year to Alyson Lee and Pauline Mac, the creative team behind Enterprise S5 for a photo-comic. Enterprise S5 is a scripted video slide-show series, with text subtitles and set to music, which is based on an idea broached years earlier by the co-founder of TrekUnited, Thomas Moore, for an animated continuation of the canceled TV series, Star Trek: Enterprise. The videos are proving to be very popular and, from a creative standpoint, represent a unique media format. This photonovel is the graphic work of Alyson, who did an amazing job to get the first episode converted into a comic style for me in a very limited timespan. It is offered to you as day 8 of the 2011 Twelve Trek Days of Christmas celebration, not just as a cracking good graphic novel in its own right but as an example of what can be done creatively with screen captures. Fan made Star Trek graphic novels, whether made with screen-captures, animation software or handdrawn are a thriving media and we at TrekUnited Publishing are excited to help bring it to you. We hope you enjoy .

4 To Boldly Go Where No Screen Capture Has Gone Before http://bullyscomics.blogspot.com/2007/10/to-boldly-go-where-no-screencapture.html

FOLLOW THE FURTHER ADVENTURES OF THE STARSHIP ENTERPRISE NX-01 ...IN THE SEASON WE NEVER GOT... 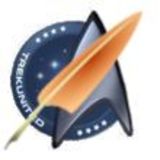 For I have Chosen The Path Unseen

A Star Trek: Enterprise Fotonovel by Alyson Lee and Pauline Mac. A romantic dinner between Starfleet's senior captains is disturbed by disas...

For I have Chosen The Path Unseen

A Star Trek: Enterprise Fotonovel by Alyson Lee and Pauline Mac. A romantic dinner between Starfleet's senior captains is disturbed by disas...