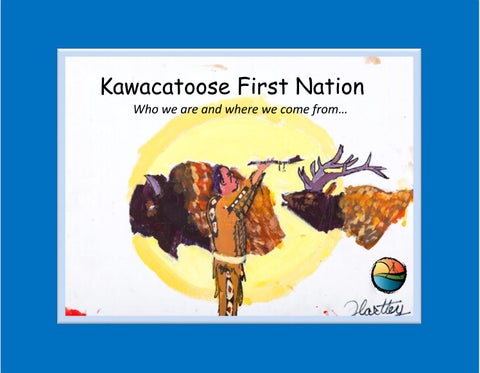 Kawacatoose First Nation Who we are and where we come fromâ&#x20AC;Ś

Dedicated to the People of Kawacatoose First Nation

The people of Kawacatoose First Nation are known as the People of Touchwood Hills (posakan-aciwiyiniwak). They knew the mamawi-ohtawimaw (Creator) gave us everything we needed to live and we did not harm the land.

We lived a Traditional and Humble life.

Our ancestors believed that the mamawi-ohtawimaw (Creator) gave us everything we needed to survive. We were free to hunt the buffalo, the elk, the deer, and other animals. We picked plants for medicines, wild berries, and vegetables. We depended on the land to survive.

We thanked the Creator each day for everything that was given to us. We knew we owned the land and did not harm it.

With the arrival of the Europeans our Traditional Way of Life started to change. We were no longer able to roam free. The buffalo herds started to become smaller and we started to go hungry. The Europeans started to take away our land and our hunting grounds for their farms.

Long ago, our ancestors would travel to manito-sakahikanihk (Manitou Beach) to the healing waters to cure the sick.

The scouts would go to Scouting Hill to keep look out for their enemies approaching the camp to steal their horses and the women.

On September 15, 1874, Chief Kawacatoose signed the Treaty 4 agreement in Fort Quâ&#x20AC;&#x2122;Appelle with the British Crown. We were promised the right to Education, Health and Land in the Treaty agreement. This agreement is supposed to last as long as the sun shines and the rivers flow and the grass grows.

After Chief Kawacatoose signed the Treaty 4 agreement our lives started to change. The government started to take away our traditions, our culture and our language. We were no longer able to perform or take part in our ceremonies. We still took part in our ceremonies in hiding. We were also told we could not leave the reserve if we did not have a â&#x20AC;&#x153;Passâ&#x20AC;? from the Indian agents.

Our ancestors were forced to attend residential schools after Treaty 4 was signed. They were told they could no longer speak our Cree language, or take part in our traditional ceremonies. They almost lost their culture and their traditional way of life. Residential schools had a great impact on the people of Kawacatoose First Nation.

The people of Kawacatoose First Nation knew that residential schools were taking the children away. They decided to take control and refused to send their children back to residential schools. In 1949 the first Day School opened with the help of our lifetime chief, Chief Edward Poorman. We wanted our children back, to learn their traditional ways, and their Cree language.

We the people of Kawacatoose First Nation continue to strive to obtain our education, our culture, and our language. We now have our own school, health centre, daycare, and rink. We are learning our language with the Kawacatoose Cree App.

We are free to take part in our ceremonies without hiding.

On July 2, 2010 at 5:53 pm our people were devastated by a F3 tornado that hit Kawacatoose First Nation and the surrounding area. Many homes were destroyed and families suffered great hardships. We pulled together as a community to help our people rebuild their lives and homes. 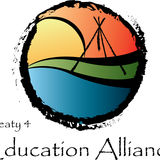 Who we are and where we come from

Who we are and where we come from