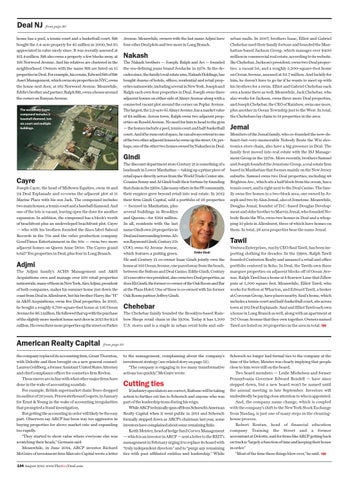 house has a pool, a tennis court and a basketball court. Sitt bought the 3.4-acre property for $5 million in 2000, but it’s appreciated in value nicely since. It was recently assessed at $11.4 million. Sitt also owns a property a few blocks away, at 166 Norwood Avenue. And his relatives are clustered in the neighborhood. Owners with the name Sitt are listed on 15 properties in Deal. For example, his cousin, Edward Sitt of Sitt Asset Management, which owns six properties in NYC, owns the house next door, at 162 Norwood Avenue. Meanwhile, Eddie’s brother and partner, Ralph Sitt, owns a house around the corner on Runyan Avenue. The waterfront Cayre compound includes a baseball diamond, tennis court and multiple buildings.

Avenue. Meanwhile, owners with the last name Adjmi have four other Deal plots and two more in Long Branch.

Nakash The Nakash brothers — Joseph, Ralph and Avi — founded the era-deﬁning jeans brand Jordache in 1978. In the decades since, the family’s real estate arm, Nakash Holdings, has bought dozens of hotels, ofﬁces, residential and retail properties nationwide, including several in New York. Joseph and Ralph each own four properties in Deal. Joseph owns three adjacent homes on either side of Almyr Avenue along with a connected vacant plot around the corner on Poplar Avenue. The largest, the 2.9-acre 65 Almyr Avenue, has a market value of $4 million. Across town, Ralph owns two adjacent properties on Roseld Avenue. No need for him to head to the gym — the homes include a pool, tennis court and half-basketball court. And if he runs out of space, he can always retreat to one of the two other adjacent houses he owns up the street. Or, perhaps, one of the other two homes owned by Nakashes in Deal.

Gindi Cayre Joseph Cayre, the head of Midtown Equities, owns 18 and 24 Deal Esplanade and co-owns the adjacent plot at 11 Marine Place with his son Jack. The compound includes two main houses, a tennis court and a baseball diamond. And one of the lots is vacant, leaving open the door for another expansion. In addition, the compound has a block’s worth of beachfront plus an undeveloped beachfront plot. Cayre — who with his brothers founded the disco label Salsoul Records in the 70s and the video production company GoodTimes Entertainment in the 80s — owns two more adjacent homes on Queen Anne Drive. The Cayres grand total? Ten properties in Deal, plus four in Long Branch.

Adjmi The Adjmi family’s ACHS Management and A&H Acquisitions own and manage over 100 retail properties nationwide, many of them in New York. Alex Adjmi, president of both companies, makes his summer home just down the coast from Deal in Allenhurst, but his brother Harry, the “H” in A&H Acquisitions, owns ﬁve Deal properties. In 2005, he bought a roughly 6,700-square-foot house at 136 Ocean Avenue for $6.1 million. He followed that up with the purchase of the slightly more modest house next door in 2013 for $2.6 million. He owns three more properties up the street on Parker

Chehebar The Chehebar family founded the Brooklyn-based Rainbow Shops retail chain in the 1930s. Today it has 1,300 U.S. stores and is a staple in urban retail hubs and sub-

Jemal Members of the Jemal family, who co-founded the now-defunct-but-very-memorable Nobody Beats the Wiz electronics store chain, also have a big presence in Deal. The family ﬁrst moved into real estate with the ISJ Management Group in the 1970s. More recently, brothers Samuel and Joseph founded the Jemstone Group, a real estate ﬁrm based in Manhattan that focuses mainly on the New Jersey suburbs. Samuel owns two Deal properties, including 48 Brighton Ave., which sits a half block from the ocean, has a tennis court, and is right next to the Deal Casino. The family owns ﬁve homes in a two-block area, one owned by Joseph and two by Alan Jemal, also of Jemstone. Meanwhile, Douglas Jemal, founder of D.C.-based Douglas Development and older brother to Marvin Jemal, who founded Nobody Beats the Wiz, owns two homes in Deal and a whopping 10 plots in Allenhurst, three of which have homes on them. In total, 26 area properties bear the name Jemal.

Tawil Ventura Enterprises, run by CEO Saul Tawil, has been importing clothing for decades. In the 1990s, Ralph Tawil founded Centurion Realty and amassed a retail and ofﬁce portfolio centered in Soho. In Deal, the Tawils own three marquee properties on adjacent blocks off of Ocean Avenue. Ralph Tawil has a home at 8 Seaview Lane that Zillow puts at 5,300 square feet. Meanwhile, Elliot Tawil, who works for Sutton at Wharton, and Edward Tawil, a broker at Corcoran Group, have places nearby. Saul’s home, which includes a tennis court and half-basketball court, sits across town at 102 Deal Esplanade. Saul and Elliot Tawil each own a house in Long Branch as well, along with an apartment at 787 Ocean Avenue that they own together. Owners named Tawil are listed on 30 properties in the area in total. TRD

the company replaced its accounting ﬁrm, Grant Thornton, with Deloitte and then brought on a new general counsel: Lauren Goldberg, a former Assistant United States Attorney and chief compliance ofﬁcer for cosmetics ﬁrm Revlon. Those moves are in line with what other major ﬁrms have done in the wake of accounting scandals. For example, British supermarket chain Tesco dropped its auditor of 20 years, PricewaterhouseCoopers, in January for Ernst & Young in the wake of accounting irregularities that prompted a fraud investigation. But getting the accounting in order will likely be the easy part. Observers say ARCP has been way too aggressive in buying properties for above market rate and expanding too rapidly. “They started to show value where everyone else was scratching their heads,” Germain said. Meanwhile, in June 2014, ARCP investor Richard McGuire of investment ﬁrm Marcato Capital wrote a letter 104 August 2015 www.TheRealDeal.com

The discount department store Century 21 is something of a landmark in Lower Manhattan — taking up a prime piece of retail space directly across from the World Trade Center site. Cousins Sonny and Al Gindi built their fortune by founding that chain in the 1960s. Like many others in the SY community, their empires grew beyond retail into real estate. In 2012 their ﬁrm Gindi Capital, sold a portfolio of 26 properties — focused in Manhattan, plus several buildings in Brooklyn and Queens—for $164 million. In all, residents with the last name Gindi own 28 properties in Deal and surrounding towns. Al’s son Raymond Gindi, Century 21’s COO, owns 62 Jerome Avenue, Eddie Gindi which features a putting green. He and Century 21 co-owner Isaac Gindi jointly own the house at 103 Ocean Avenue, one parcel away from the beach, between the Suttons and Deal Casino. Eddie Gindi, Century 21’s executive vice president, also owns two Deal properties, as does Eli Gindi, the former co-owner of the Oak Room and Bar at the Plaza Hotel. One of those is co-owned with his former Oak Room partner Jeffrey Gindi.

urban malls. In 2007, brothers Isaac, Elliot and Gabriel Chehebar used their family fortune and founded the Manhattan-based Jackson Group, which manages over $400 million in commercial real estate, according to its website. Ike Chehebar, Jackson’s president, owns two Deal properties: a vacant lot, and a roughly 3,200-square-foot home on Ocean Avenue, assessed at $2.7 million. And luckily for him, he doesn’t have to go far if he wants to meet up with his brothers for a swim. Elliot and Gabriel Chehebar each own a home there as well. Meanwhile, Jack Chehebar, who also works for Jackson, owns three more Deal properties, and Joseph Chehebar, the CEO of Rainbow, owns one more, plus another in Ocean Township just to the West. In total, the Chehebars lay claim to 18 properties in the area.

to the management, complaining about the company’s investment strategy (see related story on page 52). “The company is engaging in too many transformative actions too quickly,” McGuire wrote.

Cutting ties If industry speculators are correct, Rufrano will be taking action to further cut ties to Schorsch and anyone who was part of the leadership team during his reign. While ARCP technically spun off from Schorsch’s American Realty Capital when it went public in 2011 and Schorsch formally stepped down as ARCP’s chairman last year, some investors have complained about some remaining links. Keith Meister, head of hedge fund Corvex Management — which is an investor in ARCP — sent a letter to the REIT’s management in February urging it to replace its board with “truly independent directors” and to “purge any remaining ties with past afﬁliated entities and leadership.” While

Schorsch no longer had formal ties to the company at the time of the letter, Meister was clearly implying that people close to him were still on the board. Two board members — Leslie Michelson and former Pennsylvania Governor Edward Rendell — have since stepped down, but a new board won’t be named until the annual meeting in late September. Investors will undoubtedly be paying close attention to who is appointed. And, the company name change, which is coupled with the company’s shift to the New York Stock Exchange from Nasdaq, is just one of many steps in the cleaninghouse process. Robert Rostan, head of financial education company Training the Street and a former accountant at Deloitte, said for ﬁrms like ARCP getting back on track is “largely a function of time and keeping their house in order.” “Most of the time these things blow over,” he said. TRD 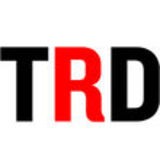