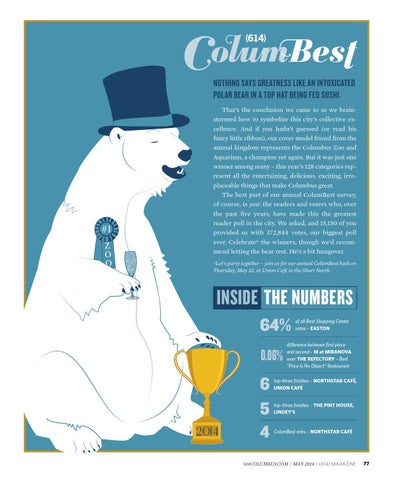 NOTHING SAYS GREATNESS LIKE AN INTOXICATED POLAR BEAR IN A TOP HAT BEING FED SUSHI. That’s the conclusion we came to as we brainstormed how to symbolize this city’s collective excellence. And if you hadn’t guessed (or read his fancy little ribbon), our cover model friend from the animal kingdom represents the Columbus Zoo and Aquarium, a champion yet again. But it was just one winner among many – this year’s 128 categories represent all the entertaining, delicious, exciting, irreplaceable things that make Columbus great. The best part of our annual ColumBest survey, of course, is you: the readers and voters who, over the past five years, have made this the greatest reader poll in the city. We asked, and 15,150 of you provided us with 372,844 votes, our biggest poll ever. Celebrate* the winners, though we’d recommend letting the bear rest. He’s a bit hungover. *let’s party together – join us for our annual columbest bash on Thursday, may 22, at union café in the short North.

15.67% of 4,467 votes • What a difference a decade makes. Once a dangerous pocket of the city and later an enclave of independent arts culture, it has now become the center of the city’s culinary and nightlife scene, and a jewel to show off to out-of-town visitors. www.shortnorth.org 2 Grandview 12.72% 3 Clintonville 11.95%

31.64% of 4,046 votes • Jungle Jack, the man on permanent safari, has won over our readers again with his outsized personality and the Columbus Zoo’s menagerie of wild, exotic, and captivating animals right in our backyard. www.jackhanna.com 2 Nina West 15.72% 3 Urban Meyer 12.56%

33.00% of 3,464 votes • Our hats are off to all the goodhearted that give so much to Columbus. Mid-Ohio Foodbank’s tireless efforts to solve the hunger problem have earned it more well-deserved recognition. Kudos. 3960 Brookham Drive, Grove City, www.midohio foodbank.org 2 Pelotonia 19.43% 3 Ronald McDonald House Charities of Central Ohio 17.18%

20.11% of 3,600 votes • Everyone has to love something at ComFest. It has it all – food, music, art, tattoos, half-naked people decorated in body paint, old hippies rollerblading in belly shirts – what else do you want? Goodale Park – 120 W Goodale st., www.comfest.com

22.79% of 2,255 votes • Sure, he’s an author, a playwright, and a professor, too, but we mostly look to Nick Dekker to fork over all the latest intel on the best brunch, the greasiest gravy, and the most baller pancake balls in the capital city. www.breakfastwithnick.com 2 CHeryl HarrisoN, driNk UP ColUMbUs 18.05% 3 aMaNda, Girl aboUt ColUMbUs 14.59%

Best “PriCe is NO OBJeCt” restauraNt

13.54% of 2,924 votes • In a sea of new bars and pubs, it’s hard not to notice The Pint House, whose ambitious scale (4,800 square feet) and unique amenities (a retractable beer garden roof) have made it the toast of the capital city, as well as a harbinger of the continuing evolution in the Short North. A commitment to local art, craft beer, and a customizable experience (such as the immensely popular photo booth) has one of the new kids on the block positioned as a savvy veteran. 780 N High St., www.pinthouse.thecgsgroup.com

32.79% of 2,571 votes • Great beer selection, celebrity-inspired cocktails, classic arcade games, daily specials, themed nights, and Burt Reynolds – How many people are kicking themselves for not opening this bar five years ago? If you haven’t been to 16-Bit yet, you should. And remember: where you’re going, you don’t need roads. 254 S Fourth St., www.16-bitbar.com 2 The Pint House 22.05% 3 Bakersfield 9.06%

Photos by: OPPOSITE TOP AND ABOVE: MEGAN LEIGH BARNARD OPPOSITE BOTTOM: CHRIS CASELLA

37.95% of 1,365 votes • In a town like Hilliard, Lucky’s defines the classic neighborhood bar – quick bites and bountiful deals on pitchers and pints, as well as a true connection to the community through sponsorships of all forms of local rec sports teams. 5387 roberts rd., www.luckysgrille.com 2 otie’s 20.66% 3 Nasty’s sPorts bar 15.09%

PHotos by: above aNd oPPosite riGHt: beN yoder, oPPosite left: MeGaN leiGH barNard

38.03% of 1,291 votes • Ring-a-ding-ding... A night out at The Top means stepping back into time, where the classic ambiance – complete with lounge piano seven nights a week – has entertained Bexley and the rest of the city for nearly 60 years. 2891 E Main St., www.thetopsteakhouse.com 2 The Rusty Bucket 26.41%

12.03% of 2,294 votes • While they may have been unseated from their throne in the increasingly crowded High Street bar scene, Bodega is still a local legend. Set to re-open this spring/summer with renovated seating – both inside and out – as well some new concepts, the City of Columbus is excited to see what they come up with next. 1044 N High St., www. columbusbodega.com 2 Seventh Son Brewing 11.12% 3 Harrison’s on Third 8.37%

21.59% of 1,589 votes • Located on the grounds of two eastside LC complexes, The Goat has volleyball leagues, pools, events, and live entertainment. Bonus points if you can walk to the bar barefoot. Multiple locations, www.lcgoat.com 2 old baG of Nails 14.22%

14.01% of 1,720 votes • Winking Lizard ranks number one thanks to the fact that it carries seemingly every bottle of craft beer ever produced. Try the Lizard’s World Tour but remember it’s a marathon, not a sprint. 100 Hutchinson Ave., www. winkinglizard.com

14.50% of 2,035 votes • Grandview Café has been around since 1925, and it still reigns supreme over the neighborhood entertainment scene. Famous for its trivia nights, the Café also hosts karaoke on Sundays and live music on weekends. 1455 W Third Ave., www.grandviewcafe.com

29.57% of 3,521 votes • Don’t think you have to wear a handlebar mustache with your suspenders to get into the spirit at Curio, where the city’s best mixologists are ready and willing to serve you modern twists on pre-prohibition classics. 495 S Fourth St., www.curioatharvest.com 2 Mouton 15.8% 3 M at Miranova 13.78%

28.49% of 2,489 votes • CBC retains its title as the city’s best brewery but now has one-year-old Seventh Son nipping at its heels. Amidst the craft beer boom, this category will only get more interesting, and we’ll all be the beneficiaries. 535 Short St., www. columbusbrewing.com 2 Seventh Son Brewing 22.06%

25.91% of 2,582 votes • The concept of an Irish pub in the Midwest is a simple one, but it ain’t easy to do it this well. The drinking surface itself comes from the Emerald Isle – Guinness tastes great anywhere, but it tastes best here. Multiple locations, www.hdrestaurants.com/brazenhead 2 byrNe’s PUb 15.96% 3 fado irisH PUb 12.16% Brazenhead Also Won:

39.80% of 1,741 votes • A big year for Union – not only did it solidify its dominance as the best LGBT bar, but it nabbed second place as Best Overall Bar, and its sister joint Axis nearly completed a sweep in the category with a strong third-place showing. The icing on the cake? Union also stole an upset gold medal for Best Drinking Patio. 782 N High St., www.columbusnightlife.com 2 Level Dining Lounge 15.39% 3 Axis 11.09%

18.1% of 3,155 votes • Wanna sit down and enjoy Spanish tapas on the best patio in town? Well, you better get in line. It’s first-come-firstserve-no-reservations, but if you snag a seat, you’ll feel like the mayor of German Village. 263 E Whittier St., www.barcelonacolumbus.com 2 Lindey’s 15.53%

18.15% of 1,758 votes • For the third straight year, (614) readers have selected The Wine Bistro as their favorite oenophile’s haven. The upside – a staggering assortment of blends and varietals. The downside – at some point you have to leave. Multiple locations, www.winebistrocolumbus.com 2 viNo viNo 17.29% 3 tHe refeCtory 15.87%

24.0% of 2,396 votes • Can’t find your favorite beer at any of World of Beer’s two locations? Well, then your favorite beer probably isn’t very good. Trust in these guys and gals to keep you thirsty for the finest in the country’s – nay, the world’s – craft beer craze. Multiple locations, www.wobusa.com

31.69% of 1,518 votes • Single and afraid to mingle? The open layout of Bar Louie might seem a little intimidating at first, but there are a great many little nooks for chatting up a newfound paramour, not to mention great happy hour specials on food and booze! Multiple locations, www.barlouieamerica.com

32.32% of 2,194 votes • Not only does this store have the greatest deal to ever hit alcohol stands (the build-your-own six-pack) but tastings also abound throughout the month for those wishing to hone their palates. Multiple locations, www.andersonsstore.com 2 Weiland’s Gourmet Market 18%

15.75% of 3702 votes • Who in the Lovers Set haven’t exchanged smoldering glances over molten food dip? Apparently none of you; you guys love this place, or perhaps it’s cheese the temperature of hot lava, or third-degree chocolate burns or is it merely the ambiance? 4014 Townsfair Way, Easton, www.columbusmeltingpot.com 2 The Refectory 15.26%

15.61% of 2,178 votes • Whether you’re fan of acoustic music or not, Kelly Zullo is one to watch – not just a singer-songwriter, but a badass guitar player as well. Chicago, Yellow Springs, and good old C-bus will get a look-and-listen in person this month. www.kellyzullomusic.com 2 Molly Winters 11.29% 3 Tony Monaco 8.03%

12.17% of 3,287 votes • Formerly a pageant beauty star, the lovely Day has proven that she has the mettle, charisma, and drive to excel in the competitive world of television news, while never losing the girl-next-door vibe that we’ve all come to love. Congrats, Monica! www.nbc4i.com 2 Chris Bradley 10TV 11.59% 3 Dom Tiberi 10TV 11.2%

9.43% of 2,969 votes • This is just the way it’s been in Columbus music for the past four years: if the Floorwalkers are involved, there’s a damn good chance they’re at the top of the bill. The same goes for our readers poll, which has tapped the local rock and soul warriors for a third time as ColumBest champions. www.thefloorwalkers.com 2 MoJoFlo 7.34% It's a TIE! 2 The Castros 7.34%

32.48% of 2,235 votes • If you’re tired of modern music and all its electro-pop/indietronica hootenanny, listen to The Reaganomics throw it way back to the 1980s – a time of where a poor economy didn’t slow down the era’s excess – musically and otherwise. www.reaganomics.com 2 Hoo Doo Soul 15.53% 3 The Winnie Cooper Project 15.35%

PHotos by: above: Cary WHitt, oPPosite toP: CHris Casella, oPPosite bottoM: NiCole dixoN

37.53% of 1,860 votes • Skully’s calls itself a “music diner” and not exclusively a dance club, but branding is merely a technicality when you consider their Thursday night Ladies ’80s party has been banging regularly since its inception. And it’s not just “Come On Eileen” – frequent soul, electronic, and hip-hop shows keep the dance floor from gathering any dust. 1151 N High st., www.skullys.org 2 axis 23.39% 3 brotHers 13.6%

46.12% of 1,789 votes • This classic record shop has been in operation since 1971. The store’s namesake, a legendary burlesque performer in San Fran’s Haight-Asbury scene, would be proud of the shop’s assortment of old and new, vinyl, disc, and beyond. Vinyl lives! 1155 N High St., www.thunderpussy.com 2 Used Kids 19.62%

34.53% of 6,258 votes • Newcomer Grandview Grind unseats longtime favorite Stauf’s thanks to a bevy of locally roasted coffees, specialty drinks, and flavored shots, including bacon. Bacon, for the win. 1423-a Grandview ave., www.grandviewgrind.com

PHotos by: above: CHris Casella oPPosite: beN yoder

51.55% of 2,289 votes • While the offerings for local comedy have blasted off in the recent years, there’s still one big headliner in town, and that’s the Columbus Funny Bone, the flagship club of the nationwide outfit. This is the place to go to get big laughs from a big stage. 145 Easton Town Center, www.columbusfunnybone.com 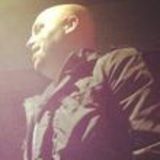