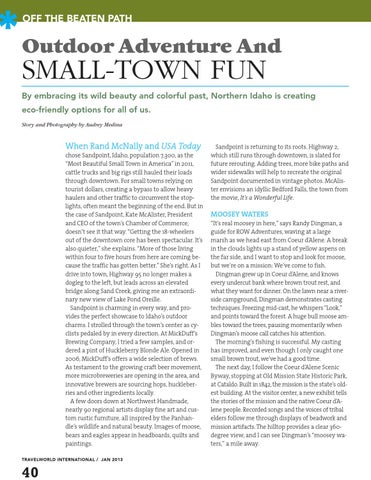 * SMALL-TOWN FUN OFF THE BEATEN PATH

By embracing its wild beauty and colorful past, Northern Idaho is creating eco-friendly options for all of us. Story and Photography by Audrey Medina

When Rand McNally and USA Today chose Sandpoint, Idaho, population 7,300, as the “Most Beautiful Small Town in America” in 2011, cattle trucks and big rigs still hauled their loads through downtown. For small towns relying on tourist dollars, creating a bypass to allow heavy haulers and other traffic to circumvent the stoplights, often meant the beginning of the end. But in the case of Sandpoint, Kate McAlister, President and CEO of the town’s Chamber of Commerce, doesn’t see it that way. “Getting the 18-wheelers out of the downtown core has been spectacular. It’s also quieter,” she explains. “More of those living within four to five hours from here are coming because the traffic has gotten better.” She’s right. As I drive into town, Highway 95 no longer makes a dogleg to the left, but leads across an elevated bridge along Sand Creek, giving me an extraordinary new view of Lake Pond Oreille. Sandpoint is charming in every way, and provides the perfect showcase to Idaho’s outdoor charms. I strolled through the town’s center as cyclists pedaled by in every direction. At MickDuff’s Brewing Company, I tried a few samples, and ordered a pint of Huckleberry Blonde Ale. Opened in 2006, MickDuff’s offers a wide selection of brews. As testament to the growing craft beer movement, more microbreweries are opening in the area, and innovative brewers are sourcing hops, huckleberries and other ingredients locally. A few doors down at Northwest Handmade, nearly 90 regional artists display fine art and custom rustic furniture, all inspired by the Panhandle’s wildlife and natural beauty. Images of moose, bears and eagles appear in headboards, quilts and paintings.

Sandpoint is returning to its roots. Highway 2, which still runs through downtown, is slated for future rerouting. Adding trees, more bike paths and wider sidewalks will help to recreate the original Sandpoint documented in vintage photos. McAlister envisions an idyllic Bedford Falls, the town from the movie, It’s a Wonderful Life.

MOOSEY WATERS “It’s real moosey in here,” says Randy Dingman, a guide for ROW Adventures, waving at a large marsh as we head east from Coeur d’Alene. A break in the clouds lights up a stand of yellow aspens on the far side, and I want to stop and look for moose, but we’re on a mission: We’ve come to fish. Dingman grew up in Coeur d’Alene, and knows every undercut bank where brown trout rest, and what they want for dinner. On the lawn near a riverside campground, Dingman demonstrates casting techniques. Freezing mid-cast, he whispers “Look,” and points toward the forest. A huge bull moose ambles toward the trees, pausing momentarily when Dingman’s moose call catches his attention. The morning’s fishing is successful. My casting has improved, and even though I only caught one small brown trout, we’ve had a good time. The next day, I follow the Coeur d’Alene Scenic Byway, stopping at Old Mission State Historic Park, at Cataldo. Built in 1842, the mission is the state’s oldest building. At the visitor center, a new exhibit tells the stories of the mission and the native Coeur d’Alene people. Recorded songs and the voices of tribal elders follow me through displays of beadwork and mission artifacts. The hilltop provides a clear 360degree view, and I can see Dingman’s “moosey waters,” a mile away. 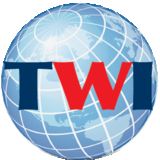