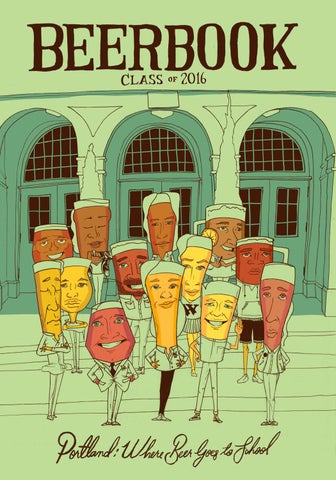 Portland was one of the original stomping grounds for microbreweries, and it continues to be a place where new brewmasters hone their craft alongside some of the countryâ&#x20AC;&#x2122;s most iconic names in beer. This Beerbook profiles some of the most essential and exciting breweries in the city, from the freshman newbies to the popular seniors. And while you should only drink alcohol if youâ&#x20AC;&#x2122;re of legal drinking age (and do so responsibly!), we gotta say: if Portland beer were a university, weâ&#x20AC;&#x2122;d never want to graduate.

Head Cheerleader: Widmer Ever since Widmer was a little girl, she dreamed of topping a human pyramid, and during the homecoming game this year, she realized that dream. The whole school saw it: blonde hair glinting in the moonlight, her bright voice leading the cheer, the optimistic X she made with her body. Even the mascot stopped to watch. Donâ&#x20AC;&#x2122;t hate Widmer because she was born beautiful: hate her because sheâ&#x20AC;&#x2122;s got some of the best Hefes around. Gimme a B-E-E-R: The classic Hefeweizen, blonded to perfection.

Emo Hipster: Hopworks Hopworks was biking everywhere before it was cool. He bikes to and from school, even when it rains. He leaves his pant leg rolled up during chemistry, and the girls swoon. He listens to indie rock when he rides. And heâ&#x20AC;&#x2122;ll make you a mix CD if you want. His dream? To open a bar where you could bike away your tab. And he did. Biking Beverage: The Totally Radler. What, you donâ&#x20AC;&#x2122;t know what a radler is? No worries, Hopworks will show you.

Townie: McMenamins Just because McMenamins doesn’t go to school anymore doesn’t mean he can’t hang out with the class of 2015. After all, McMenamins knows all the best soaking pools to crash in town. He loves school so much he even opened one of his own. Oh, look, he left you a note: meet me in the Boiler Room. Well, what are you waiting for? OG Brew: True townies know to order Hammerhead Pale Ale.

Prep: Laurelwood Laurelwood loves chinos, but not just because they go with everything. She loves them because she gets up early, and in the quiet of the morning, she irons them. Watch how she sprays a fine mist of lavender water before steaming the crease in place. Watch as heads turn when she walks down the hall in those pants and a monogrammed polo. Sheâ&#x20AC;&#x2122;s a classic girl, Laurelwood. Who can blame her for loving smooth textures and clean lines? She sets the standard for the rest of us. Classic Concoction: The Cable Knit Pale Ale for when you need the warm and cozies without sacrificing style.

Class President: Coalition Brewing Coalition wants your vote, but she also wants something more: your input. At the last student council meeting, her proposal to upgrade the dining hall food (based on her time spent campaigning table to table) had the crowd cheering. She believes in governance by the people, for the people, so if the people want Tater Tot Tuesday, by God theyâ&#x20AC;&#x2122;ll have Tater Tot Tuesday. The Most Votes Go to: Whatever local homebrew is available on the Coalator tap.

Party Animal: Hair of the Dog Brewing Company If you want to know the location of the best after-party, never fear. Hair of the Dog knows where it is. When you get there, look for her in the back room. She’ll be the one starting the spin-the-bottle game. And if you’re feeling a bit slow the next morning, don’t worry: call Hair of the Dog. She knows the remedy. Party Potion: The 11% Doggie Claws barley wine is why the phrase “turnt” was invented.

Fancy Pants: Ground Breaker Your mom and dad love Ground Breaker. “Doesn’t he have such good taste?” they say when you get home from your date to the opera. Some kids call him “fancy pants,” but he prefers the term “sophisticated.” He knows how to tie a Windsor knot with his eyes closed. He’ll never turn down good charcuterie. Once, the dean asked him for a cologne recommendation. And you’ve gotta admit it: there’s something refreshing about a guy who likes the finer things in life. Libation of Choice: For when you have a hankering for rose hips, try the blackberry-brewed Olallie Ale, which is gluten-free, of course.

Activist: Ex Novo Ex Novo brakes for squirrels. Well, she would if she drove a car, but she doesn’t because she’s trying to reduce her carbon footprint. After class you’ll find her at the soup kitchen or the literacy center or the women’s shelter. You can’t miss her—she’ll be the volunteer wearing braids and Birkenstocks. The fastest way to her heart? Try donating to her favorite causes. There’s nothing Ex Novo loves more than someone with a heart of nonprofit gold. Action Ale: Get to know the delicious Peaching to the Choir and then when you go out into the world, use it for the greater good.

World Traveler: BTU Brasserie and Brewery BTU spent the summer in China and now he won’t eat the lo mein they serve in the commons. He says it isn’t authentic and that he’s tasted true Chinese cuisine. Sometimes in French class he answers in Mandarin, and the teacher eats it up. He doesn’t need to be in that class, anyway: he went to a French immersion elementary school. BTU could pick any major he wants but says he’ll probably study abroad instead. Watch out, Sorbonne. This kid knows his geography. Worldly Refreshment: Beer of the Bock lager celebrates the Chinese New Year with notes of ginger and Sichuan peppercorns (and shouldn’t there always be some personal edification with your beer?).

Class Clown: Gigantic Brewing No one can remember the last time there was a pep rally without Gigantic doing something like streaking through the marching band. Last week he managed to flood the hallways with soap bubbles, which smelled really good despite the dean’s epic fall. But here’s a secret: whenever Gigantic is pretending to read the textbook in class, we hear he’s actually drawing a bunch of colorful comics in a notebook tucked inside the book. They’re labels for something, he says, but no one knows exactly what. For a Good Time, Drink: The Gigantic IPA. It’s over-the-top tasty.

New Kid in Town: Zoiglhaus This year there was a transfer student from Germany that nobody knew. At first Zoigl didnâ&#x20AC;&#x2122;t talk that much and was kind of a loner. But then one Friday night he showed up at the football game with a whole tray of steaming-hot Bavarian pretzels as big as your face. He was instantly swarmed by peopleâ&#x20AC;&#x201D;you could smell those pretzels from the other side of the field. He handed them out to everyone and said he made them himself, kneaded the thick dough and carefully folded the legs. It was the first time anyone heard him talk. Everyone fell silent and listened as they ate. This new kid was about to change everything. Homesick Cure: The Kicker KĂślsch, for an authentic dose of Cologne, Germany.

Ski Bum: Base Camp If you need help spotting Base Camp, look for the guy with the white raccoon tan around his eyes. It always makes him look super awake in 8 a.m. class, which is helpful because usually he’s wicked tired from a weekend spent shreddin’ fresh pow on Mt. Hood. And if there’s a storm in the forecast, forget it: Base Camp will be absent. But when he is in class, he’s the chillest one in chemistry and the happiest guy in history. Why is he in such a good mood? Ask him and he’ll lower his goggles on his face, smile that smile, and say, “Après-ski, baby.” In the Canteen: The Ultra Gnar Gnar I.P.A. smells like a hint of pine and goes down like the smoothest slalom.

Aja Gabel is a writer living in Portland, Oregon, where she frequently enjoys locally brewed pale ales but will drink a good stout if the mood strikes. Sheâ&#x20AC;&#x2122;s lived in California, Connecticut, Virginia, Texas, and Massachusetts but prefers Portland partly because none of those other places have zine guidebooks. Aja has published short stories and essays and is at work on a novel, in which beer also makes a meaningful cameo. http://www.ajagabel.com

Leo Zarosinski is an illustrator in Portland, Oregon. He will draw on anything for inspiration, but mostly he uses paper. http://www.leozarosinski.com

WHAT’S A ZINE? /'zēn/ZEEN: An independently published booklet, usually reproduced via photocopier and folded and stapled. Zines represent a rebellion from mainstream publishing. Portland has one of the strongest zine scenes because of its progressive spirit and DIY ethos.

WHAT’S A PORTLAND? Portland is a friendly city filled with interesting, creative people who made this zine just for you. It’s a place for anyone who likes anything: From craft beer to homemade bitters, dormant volcanoes to 500+ food carts, Portland has it all.

CHECK OUT OTHER TITLES IN THE PORTLAND ZINES SERIES! Zines in this series include A Feminist’s Guide to Beer Drinking, Get Out, Portland Pizza Guide, 34 Things to Do in the Rain, Stand Here and Look Up, Riding in the Rain, An Octicorn’s Guide to Portland and more.

Discover all the Portland Zines and plan your trip at TravelPortland.com. © 2015 Travel Portland. All rights reserved. 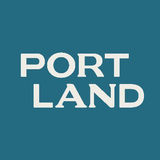