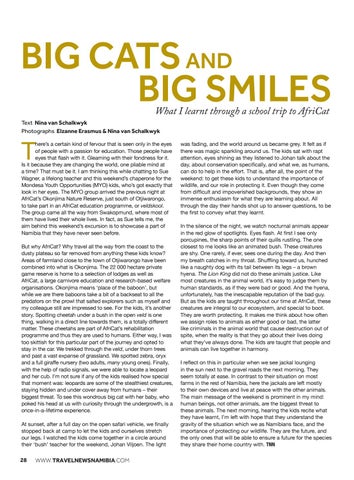 here’s a certain kind of fervour that is seen only in the eyes of people with a passion for education. Those people have eyes that flash with it. Gleaming with their fondness for it. Is it because they are changing the world, one pliable mind at a time? That must be it. I am thinking this while chatting to Sue Wagner, a lifelong teacher and this weekend’s chaperone for the Mondesa Youth Opportunities (MYO) kids, who’s got exactly that look in her eyes. The MYO group arrived the previous night at AfriCat’s Okonjima Nature Reserve, just south of Otjiwarongo, to take part in an AfriCat education programme, or veldskool. The group came all the way from Swakopmund, where most of them have lived their whole lives. In fact, as Sue tells me, the aim behind this weekend’s excursion is to showcase a part of Namibia that they have never seen before. But why AfriCat? Why travel all the way from the coast to the dusty plateau so far removed from anything these kids know? Areas of farmland close to the town of Otjiwarongo have been combined into what is Okonjima. The 22 000 hectare private game reserve is home to a selection of lodges as well as AfriCat, a large carnivore education and research-based welfare organisations. Okonjima means ‘place of the baboon’, but while we are there baboons take a bit of a backseat to all the predators on the prowl that salted explorers such as myself and my colleague still are impressed to see. For the kids, it’s another story. Spotting cheetah under a bush in the open veld is one thing, walking in a direct line towards them, is a totally different matter. These cheetahs are part of AfriCat’s rehabilitation programme and thus they are used to humans. Either way, I was too skittish for this particular part of the journey and opted to stay in the car. We trekked through the veld, under thorn trees and past a vast expanse of grassland. We spotted zebra, oryx and a full giraffe nursery (two adults, many young ones). Finally, with the help of radio signals, we were able to locate a leopard and her cub. I’m not sure if any of the kids realised how special that moment was: leopards are some of the stealthiest creatures, staying hidden and under cover away from humans – their biggest threat. To see this wondrous big cat with her baby, who poked his head at us with curiosity through the undergrowth, is a once-in-a-lifetime experience. At sunset, after a full day on the open safari vehicle, we finally stopped back at camp to let the kids and ourselves stretch our legs. I watched the kids come together in a circle around their ‘bush’ teacher for the weekend, Johan Viljoen. The light

was fading, and the world around us became grey. It felt as if there was magic sparkling around us. The kids sat with rapt attention, eyes shining as they listened to Johan talk about the day, about conservation specifically, and what we, as humans, can do to help in the effort. That is, after all, the point of the weekend: to get these kids to understand the importance of wildlife, and our role in protecting it. Even though they come from difficult and impoverished backgrounds, they show an immense enthusiasm for what they are learning about. All through the day their hands shot up to answer questions, to be the first to convey what they learnt. In the silence of the night, we watch nocturnal animals appear in the red glow of spotlights. Eyes flash. At first I see only porcupines, the sharp points of their quills rustling. The one closest to me looks like an animated bush. These creatures are shy. One rarely, if ever, sees one during the day. And then my breath catches in my throat. Shuffling toward us, hunched like a naughty dog with its tail between its legs – a brown hyena. The Lion King did not do these animals justice. Like most creatures in the animal world, it’s easy to judge them by human standards, as if they were bad or good. And the hyena, unfortunately, has the inescapable reputation of the bad guy. But as the kids are taught throughout our time at AfriCat, these creatures are integral to our ecosystem, and special to boot. They are worth protecting. It makes me think about how often we assign roles to animals as either good or bad, the latter like criminals in the animal world that cause destruction out of spite, when the reality is that they go about their lives doing what they’ve always done. The kids are taught that people and animals can live together in harmony. I reflect on this in particular when we see jackal lounging in the sun next to the gravel roads the next morning. They seem totally at ease. In contrast to their situation on most farms in the rest of Namibia, here the jackals are left mostly to their own devices and live at peace with the other animals. The main message of the weekend is prominent in my mind: human beings, not other animals, are the biggest threat to these animals. The next morning, hearing the kids recite what they have learnt, I’m left with hope that they understand the gravity of the situation which we as Namibians face, and the importance of protecting our wildlife. They are the future, and the only ones that will be able to ensure a future for the species they share their home country with. TNN 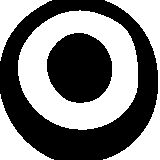 In the spring issue of Travel News Namibia we discover unexpected journeys and epic adventures throughout this enigmatic land. Join us as we...

In the spring issue of Travel News Namibia we discover unexpected journeys and epic adventures throughout this enigmatic land. Join us as we...