Coachella Valley is a valley in the state of California, USA. The valley is 45 miles long, 15 miles wide, and is home to 9 different cities and 400,000 residents. Although very hot in the summer, it’s a perfect spot for a sunny winter getaway!

This trip was actually a trip inside of a trip.. tripception! I was visiting a friend in Portland (Oregon) for a couple of weeks during a break from university, and while there, me, my friend, and his Dad would fly down to the desert to stay in a relatives vacant second home.

We were staying in Palm Desert, which is sort of in the middle of the valley. I thought it was weird how there were so many different cities in such a small valley, but that’s how it was! The cities were all quite similar to each other, however each had their own personality.

The most famous one is probably Palm Springs, which was once a popular retreat for Hollywoods star. Icons such as Elvis Presley, Marilyn Monroe, and Frank Sinatra all once had homes here!

You can see why people love visiting. It was beautiful and the weather was perfect! The only downside is the heat. Being a desert, it is hot. We were only visiting in April, but it still got up to 37°c / 99°f. In the summer it can go as high as 47°c / 116°f. Nope!!

Although in the winter, when its around 21°c / 70°f with clear blue skies, there might not be anywhere nicer in the world.

One of the main attractions in the valley is the Coachella music festival, which is one of the most popular in the world. Sadly we were a week to early for that, but there was still plenty to do!

A lot of our time was spent hiking. Not just in the desert, but also in the nearby mountains, which were a lot cooler. There was even snow up there! We also spent some time driving around the area and seeing lots of interesting art pieces.

My favorite day was when we went out past the Salton Sea to Salvation Mountain. It was one of the most interesting places I’ve ever seen, and the entire area was like somewhere from another world!

After flying down to Palm Springs airport and getting settled in the house (which was amazing), we had a couple of relaxing days enjoying the sun before heading out for some adventures!

Although it looks like its over a hundred years old, Pioneertown was actually founded as recently as 1946! It was created by some Hollywood investors who wanted a film set for their western movies, which could also double as a town for people to actually live in. Hundreds of films and TV shows were filmed there, although it never really took off as a liveable town.

It has a few shops, a motel, and a bar/music venue called ‘Pappy & Harriets’ which has surprisingly hosted some big names over the years, such as Lorde & Paul McCartney! It’s right on the path from Palm Desert to Joshua Tree, so we just had to make a stop. It was really cool to see the town. It was like we were walking into an old western movie, or into the world of Red Dead Redemption!

In Joshua Tree National Park, the Mojave and Colorado Deserts come together to create a really unique landscape.

The park is the only place in the world where you’ll find Joshua Trees, so the name fits! The tree got its name from Mormon settlers, who saw a similarity in the tree to the biblical story in which Joshua reaches his hands up into the sky in prayer.

The park is huge, and theres plenty of hikes to go on. We went on the Hidden Valley & Barker Dam trails, which were both short but interesting. What I enjoyed most was just driving through the desert, seeing the wide open landscapes covered in Joshua Trees, and all the animals! The sun started to set as we were driving out, so we got to see a sunset, and even do a little stargazing.

An Oasis in the Desert

Located just outside of Palm Springs, the Indian Canyons is a nature area full of canyons, palm trees, mountains, rockfaces, streams, and even some waterfalls!

The three main canyons are Andreas Canyon, Palm Canyon, and Murray Canyon. We explored a little of each, however our hiking was primarily at the Andreas Canyon, the most popular of the three.

The trail was only a mile long, however it was definitely the hardest hike we did due to the intense heat of the day. This was right on the desert valley, whereas Joshua Tree and Mt San Jacinto had more elevation to them. Still, it was a great day of hiking!

The entire area was beautiful. There was thousands of blooming wildflowers, and lots of little lizards running around on the rocks!

When the Desert Becomes the Canvas

Every second year, in the lead up to the Coachella Music Festival, Desert X comes to town. This is a sort of art festival where artists from across the world come to the valley to display some of their work.

There were almost 20 different art pieces scattered across the valley, ranging from giant sculptures to small TV screens. We didn’t have time to see them all, but we did get to see 7 of them!

The first piece we saw was a giant colorful rainbow called ‘Lovers Rainbow’. It was a dual exhibit, with another version being across the border in Mexico, giving a message of friendship during the current immigration issues.

Another cool one was ‘Specter’, a large bright orange block which had incredible contrast with the desert. It was a fun day, and a hell of a lot better than any art museum!

An Artistic Testimony to One Mans Faith

Salvation Mountain is a hand built mountain/folk art piece found just past the Eastern end of the Salton Sea.

It was built by one man, Leonard Knight. He spent nearly 30 years building it, with a mission to spread gods love throughout the harsh desert environment. Its made of hay, tires, and a whole bunch of donated paint.

It has been described as a national treasure, and has featured in a lot of media, such as the Grand Theft Auto video game, and the movie ‘Into the Wild’ (one of my favourite movies!).

It was a real treat getting to see it in person and climb the yellow brick road to the top of it.

The drive along the Salton Sea was also interesting. We stopped at Bombay Beach, an old beach resort town which is now a borderline ghost town, full of mad art and creepy looking abandoned buildings.

The San Jacinto Mountains tower over the west side of Coachella Valley. They extend for over 30 miles, and the peak of the highest mountain has an elevation of 3,302 m!

One of the best ways to get to the mountains is to take the aerial tramway. This puts you into a rotating cable car which you ride for 10 minutes as it takes you two and a half miles up the mountains to the ‘Mountain Station’.

The Mountain Station has an elevation of 2,600 m, and the views are breathtaking! It has a couple of restaurants, shops, museums, and everything else you would need from a mountain station.

We did some hiking while up there, which was a very different experience from the other hikes on this trip. Instead of Palm or Joshua Trees, there were Pine Trees! And instead of sand, there was snow! The cool air was such a nice thing to experience. It was around 30°f / 18°c colder up there compared to down on the desert floor.

The hikes were really enjoyable. There was some fun rock climbing to do, and some of the views of the valley were incredible. You could see all the way to the Salton Sea! The only issue was the trails not being very well marked, and almost getting lost a few times. Not a good place to be lost!

After the hikes we went back to the station and had some nice hot cocoa from one of the cafes. We got to sit and watch the sun set, then see the valley light up below us.

Sadly this was our last day. The next morning we’d fly back to Portland, and then a couple of days after I’d fly back to Scotland, going back to university to sit a big exam which I did almost zero revision for. But can you blame me!

The Coachella Valley is an amazing place. Even if there wasn’t a whole lot to do in the cities, the surrounding areas are full of natural beauty and fun day trip potential.

The valley is pretty well known in the USA, especially in the West Coast, but not so well known elsewhere, which is a shame. Its got so much to offer, and is definitely worth a visit the next time you might be in California!

We live in a wonderful world that is full of beauty, charm and adventure. There is no end to the adventures that we can have if only we seek them with our eyes open. 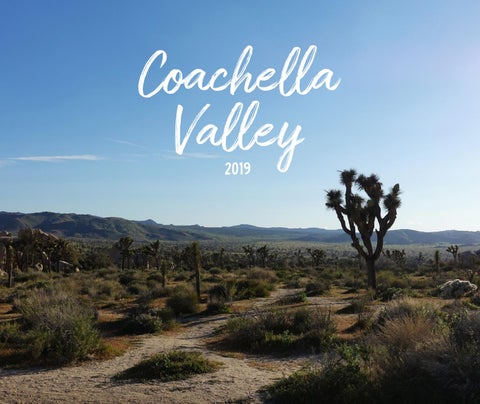