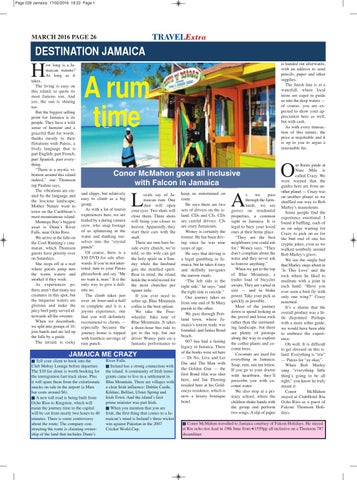 ow long is a Jamaican minute? As long as it

takes. The living is easy on this island, to quote its most famous son. And yes, the sun is shining too. But the biggest selling point for Jamaica is its people. They have a wild sense of humour and a graceful flair for words, thanks mostly to their flirtations with Patois, a lively language that is part English, part French, part Spanish, part everything. “There is a mystic vibration around this island indeed,” our Thomson rep Pauline says. The vibrations are created by the language and the luscious landscape; Mother Nature went to town on the Caribbean’s most mountainous island. Montego Bay’s biggest asset is Dunn’s River Falls, near Ocho Rios. We arrive at the falls on the Cool Running’s catamaran, which Thomson guests have priority over on Saturdays. She stops off at a reef where guests jump into the warm waters and snorkel if they wish. As experiences go, there aren’t that many sea creatures in this spot, but the turquoise waters are glorious and make the juicy beef patty served afterwards all the sweeter. When we disembark, we split into groups of 10, join hands and are led up the falls by a guide. The terrain is rocky

is handed out afterwards, with an address to send pencils, paper and other supplies. The finish line is at a waterfall, where local teens are eager to guide us into the deep waters — of course, you are expected to show your appreciation here as well, but with cash. As with every transaction of this nature, the price is negotiable and it is up to you to argue a reasonable fee.

A rum time Conor McMahon goes all inclusive with Falcon in Jamaica and slippy, but relatively easy to climb as a big group. As with a lot of tourist experiences here, we are trailed by a daring camera crew, who snap footage of us spluttering in the water and dunking ourselves into the “crystal punch”. Of course, there is a $30 DVD for sale afterwards. If you’re not interested, turn to your Patois phrasebook and say “Me no want it, man.” It is the only way to give a definite no. The climb takes just over an hour-and-a-half to complete and it is a joyous experience, one that you will definitely recommend to clients — especially because the journey home is topped with limitless servings of rum punch.

ocals say of Jamaican rum: One shot will open your eyes. Two shots will close them. Three shots will bring you closer to heaven. Apparently, they start their cars with the stuff. There are rum bars beside every church, we’re told, so the wife can get the holy spirit on a Sunday while the husband gets the distilled spirit. Bear in mind, the island holds the world record for the most churches per square mile. If you ever need to sober up, Blue Mountain coffee is the best option. We take the Freewheelin’ bike tour of Blue Mountains. It takes a three-hour bus ride to get to the top, but our driver Woney puts on a fantastic performance to

n Tell your client to book into the Club Mobay Lounge before departure. The $30 fee alone is worth booking for the immigration fast track alone. Plus it will spare them from the extortionate snacks on sale in the airport (a Mars bar costs around $6). n A new toll road is being built from Ocho Rios to Kingston, which will mean the journey time to the capital will be cut from nearly two hours to 40 minutes. There is some controversy about the route: The company constructing the route is claiming ownership of the land that includes Dunn’s

River Falls. n Ireland has a strong connection with the island: A community of Irish immigrants came to live in a settlement in Blue Mountain. There are villages with a clear Irish influence: Dublin Castle, Kildare, Belfast, Ulster Spring and Irish Town. And the island’s first prime minister was part Irish. n When you mention that you are Irish, the first thing that comes to a Jamaican’s mind is Ireland’s three wicket win against Pakistan in the 2007 Cricket World Cup.

keep us entertained en route. He says there are two sets of drivers on the island. CDs and CJs. CDs are careful drivers. CJs are crazy Jamaicans. Woney is certainly the former: He has been driving since he was nine years of age. He says that driving is a legal gambling in Jamaica, but he takes it easy and skilfully navigates the narrow roads. “The left side is the right side,” he says, “and the right side is suicide.” Our journey takes us from one end of St Mary parish to the other. We pass through Portland town, where Jamaica’s tourist trade was founded, and James Bond beach. 007 has had a lasting legacy in Jamaica. Three of the books were set here — Dr No, Live and Let Die and The Man with the Golden Gun — the first Bond film was shot here, and Ian Fleming resided here at his Goldeneye residence, which is now a luxury boutique hotel.

s we pass through the farmlands, we see graves on residential properties, a common sight in Jamaica. It is legal to bury your loved ones at their home place. “They are the best neighbours you could ask for,” Woney says. “They don’t complain about the noise and they never ask to borrow anything.” When we get to the top of Blue Mountain, a trailer load of bicycles awaits. They are varied in size — and in brake power. Take your pick as quickly as possible. Most of the journey down is spend looking at the gravel and loose rock rather than the surrounding landscape, but there are plenty of pitstops along the way to explore the coffee plants and coconut trees. Coconuts are used for everything in Jamaica: Soap, rum, sun tan lotion. If you go to your doctor with heartburn, they’ll prescribe you with coconut water. We also stop at a primary school, where the children shake hands with the group and perform two songs. A slip of paper

ur Rasta guide at Nine Mile is called Crazy. We were warned that the guides here are from another planet — Crazy was on another planet as we shuffled our way to Bob Marley’s mausoleum. Some people find the experience emotional. I found it baffling, each of us on edge waiting for Crazy to pick on us for the butt end of one his cryptic jokes, even as we walked sombrely around Bob Marley’s grave. We see the single bed that Marley sings about in ‘Is This Love’ and the rock where he liked to meditate with a joint in each hand: “Have you ever seen a bird fly with only one wing?” Crazy reasoned. It’s a shame that the overall product was a little disjointed. Perhaps with a more sober guide, we would have been able to embrace the experience. Oh well. It is difficult to get stressed on this island. Everything is “irie” — Patois for “ay okay”. When Bob Marley sang “everything little thing’s going to be all right,” you know he truly meant it. Conor McMahon stayed at ClubHotel Riu Ocho Rios as a guest of Falcon/ Thomson Holidays.

n Conor McMahon travelled to Jamaica courtsey of Falcon Holidays. He stayed at Riu ocho rios lead in 19th June from €1559pp all inclusive on a Thomson 787 dreamliner. 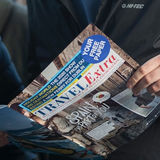