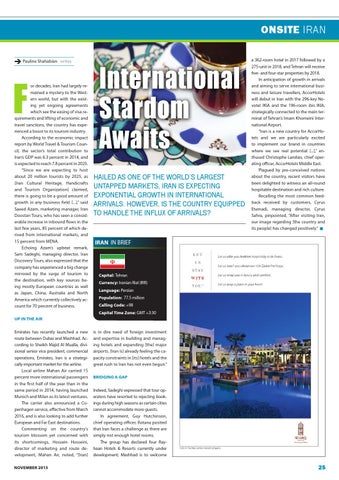 or decades, Iran had largely remained a mystery to the Western world, but with the existing yet ongoing agreements which see the easing of visa requirements and lifting of economic and travel sanctions, the country has experienced a boost to its tourism industry. According to the economic impact report by World Travel & Tourism Council, the sector’s total contribution to Iran’s GDP was 6.3 percent in 2014, and is expected to reach 7.8 percent in 2025. “Since we are expecting to host about 20 million tourists by 2025, as [Iran Cultural Heritage, Handicrafts and Tourism Organization] claimed, there is going to be a good amount of growth in any business field [...],” said Saeed Azam, marketing manager, Iran Doostan Tours, who has seen a considerable increase in inbound flows in the last few years, 85 percent of which derived from international markets, and 15 percent from MENA. Echoing Azam’s upbeat remark, Sam Sadeghi, managing director, Iran Discovery Tours, also expressed that the company has experienced a big change mirrored by the surge of tourism to the destination, with key sources being mostly European countries as well as Japan, China, Australia and North America which currently collectively account for 70 percent of business.

International Stardom Awaits HAILED AS ONE OF THE WORLD’S LARGEST UNTAPPED MARKETS, IRAN IS EXPECTING EXPONENTIAL GROWTH IN INTERNATIONAL ARRIVALS. HOWEVER, IS THE COUNTRY EQUIPPED TO HANDLE THE INFLUX OF ARRIVALS?

a 362-room hotel in 2017 followed by a 275-unit in 2018, and Tehran will receive five- and four-star properties by 2018. In anticipation of growth in arrivals and aiming to serve international business and leisure travellers, AccorHotels will debut in Iran with the 296-key Novotel IKIA and the 196-room ibis IKIA, strategically connected to the main terminal of Tehran’s Imam Khomeini International Airport. “Iran is a new country for AccorHotels and we are particularly excited to implement our brand in countries where we see real potential [...],” enthused Christophe Landais, chief operating officer, AccorHotels Middle East. Plagued by pre-conceived notions about the country, recent visitors have been delighted to witness an all-round hospitable destination and rich culture. Recalling the most common feedback received by customers, Cyrus Etemadi, managing director, Cyrus Sahra, pinpointed, “After visiting Iran, our image regarding [the country and its people] has changed positively.” 

UP IN THE AIR Emirates has recently launched a new route between Dubai and Mashhad. According to Sheikh Majid Al Mualla, divisional senior vice president, commercial operations, Emirates, Iran is a strategically important market for the airline. Local airline Mahan Air carried 15 percent more international passengers in the first half of the year than in the same period in 2014, having launched Munich and Milan as its latest ventures. The carrier also announced a Copenhagen service, effective from March 2016, and is also looking to add further European and Far East destinations. Commenting on the country’s tourism blossom yet concerned with its shortcomings, Hossein Hosseini, director of marketing and route development, Mahan Air, noted, “[Iran] NOVEMBER 2015

is in dire need of foreign investment and expertise in building and managing hotels and expanding [the] major airports. [Iran is] already feeling the capacity constraints in [its] hotels and the great rush to Iran has not even begun.” BRIDGING A GAP Indeed, Sadeghi expressed that tour operators have resorted to rejecting bookings during high seasons as certain cities cannot accommodate more guests. In agreement, Guy Hutchinson, chief operating officer, Rotana posited that Iran faces a challenge as there are simply not enough hotel rooms. The group has declared four Rayhaan Hotels & Resorts currently under development; Mashhad is to welcome