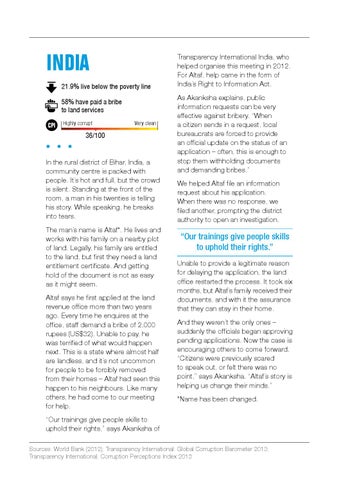 INDIA 21.9% live below the poverty line 58% have paid a bribe to land services Highly corrupt

36/100 In the rural district of Bihar, India, a community centre is packed with people. It’s hot and full, but the crowd is silent. Standing at the front of the room, a man in his twenties is telling his story. While speaking, he breaks into tears. The man’s name is Altaf*. He lives and works with his family on a nearby plot of land. Legally, his family are entitled to the land, but first they need a land entitlement certificate. And getting hold of the document is not as easy as it might seem. Altaf says he first applied at the land revenue office more than two years ago. Every time he enquires at the office, staff demand a bribe of 2,000 rupees (US$32). Unable to pay, he was terrified of what would happen next. This is a state where almost half are landless, and it’s not uncommon for people to be forcibly removed from their homes – Altaf had seen this happen to his neighbours. Like many others, he had come to our meeting for help.

Transparency International India, who helped organise this meeting in 2012. For Altaf, help came in the form of India’s Right to Information Act. As Akanksha explains, public information requests can be very effective against bribery. “When a citizen sends in a request, local bureaucrats are forced to provide an official update on the status of an application – often, this is enough to stop them withholding documents and demanding bribes.” We helped Altaf file an information request about his application. When there was no response, we filed another, prompting the district authority to open an investigation.

“Our trainings give people skills to uphold their rights.” Unable to provide a legitimate reason for delaying the application, the land office restarted the process. It took six months, but Altaf’s family received their documents, and with it the assurance that they can stay in their home. And they weren’t the only ones – suddenly the officials began approving pending applications. Now the case is encouraging others to come forward. “Citizens were previously scared to speak out, or felt there was no point,” says Akanksha. “Altaf’s story is helping us change their minds.” *Name has been changed.