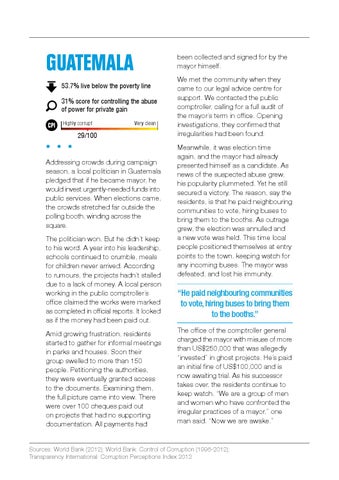 been collected and signed for by the mayor himself.

53.7% live below the poverty line 31% score for controlling the abuse of power for private gain Highly corrupt

29/100 Addressing crowds during campaign season, a local politician in Guatemala pledged that if he became mayor, he would invest urgently-needed funds into public services. When elections came, the crowds stretched far outside the polling booth, winding across the square. The politician won. But he didn’t keep to his word. A year into his leadership, schools continued to crumble, meals for children never arrived. According to rumours, the projects hadn’t stalled due to a lack of money. A local person working in the public comptroller’s office claimed the works were marked as completed in official reports. It looked as if the money had been paid out. Amid growing frustration, residents started to gather for informal meetings in parks and houses. Soon their group swelled to more than 150 people. Petitioning the authorities, they were eventually granted access to the documents. Examining them, the full picture came into view. There were over 100 cheques paid out on projects that had no supporting documentation. All payments had

We met the community when they came to our legal advice centre for support. We contacted the public comptroller, calling for a full audit of the mayor’s term in office. Opening investigations, they confirmed that irregularities had been found. Meanwhile, it was election time again, and the mayor had already presented himself as a candidate. As news of the suspected abuse grew, his popularity plummeted. Yet he still secured a victory. The reason, say the residents, is that he paid neighbouring communities to vote, hiring buses to bring them to the booths. As outrage grew, the election was annulled and a new vote was held. This time local people positioned themselves at entry points to the town, keeping watch for any incoming buses. The mayor was defeated, and lost his immunity.

“He paid neighbouring communities to vote, hiring buses to bring them to the booths.” The office of the comptroller general charged the mayor with misuse of more than US$250,000 that was allegedly “invested” in ghost projects. He’s paid an initial fine of US$100,000 and is now awaiting trial. As his successor takes over, the residents continue to keep watch. “We are a group of men and women who have confronted the irregular practices of a mayor,” one man said. “Now we are awake.”