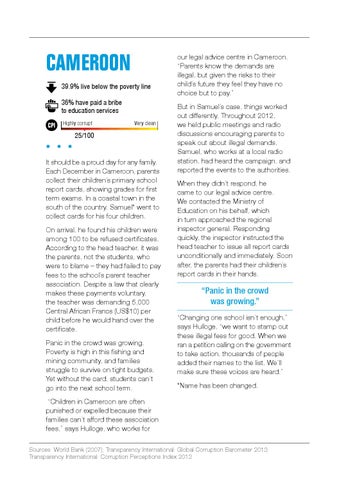 CAMEROON 39.9% live below the poverty line 36% have paid a bribe to education services Highly corrupt

25/100 It should be a proud day for any family. Each December in Cameroon, parents collect their children’s primary school report cards, showing grades for first term exams. In a coastal town in the south of the country, Samuel* went to collect cards for his four children. On arrival, he found his children were among 100 to be refused certificates. According to the head teacher, it was the parents, not the students, who were to blame – they had failed to pay fees to the school’s parent teacher association. Despite a law that clearly makes these payments voluntary, the teacher was demanding 5,000 Central African Francs (US$10) per child before he would hand over the certificate. Panic in the crowd was growing. Poverty is high in this fishing and mining community, and families struggle to survive on tight budgets. Yet without the card, students can’t go into the next school term.

our legal advice centre in Cameroon. “Parents know the demands are illegal, but given the risks to their child’s future they feel they have no choice but to pay.” But in Samuel’s case, things worked out differently. Throughout 2012, we held public meetings and radio discussions encouraging parents to speak out about illegal demands. Samuel, who works at a local radio station, had heard the campaign, and reported the events to the authorities. When they didn’t respond, he came to our legal advice centre. We contacted the Ministry of Education on his behalf, which in turn approached the regional inspector general. Responding quickly, the inspector instructed the head teacher to issue all report cards unconditionally and immediately. Soon after, the parents had their children’s report cards in their hands.

“Panic in the crowd was growing.” “Changing one school isn’t enough,” says Hulloge, “we want to stamp out these illegal fees for good. When we ran a petition calling on the government to take action, thousands of people added their names to the list. We’ll make sure these voices are heard.” *Name has been changed.