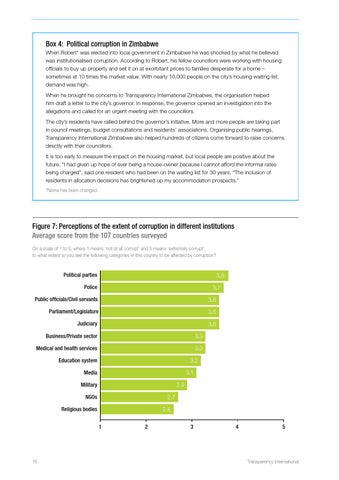 Box 4: Political corruption in Zimbabwe When Robert* was elected into local government in Zimbabwe he was shocked by what he believed was institutionalised corruption. According to Robert, his fellow councillors were working with housing officials to buy up property and sell it on at exorbitant prices to families desperate for a home – sometimes at 10 times the market value. With nearly 10,000 people on the city’s housing waiting list, demand was high. When he brought his concerns to Transparency International Zimbabwe, the organisation helped him draft a letter to the city’s governor. In response, the governor opened an investigation into the allegations and called for an urgent meeting with the councillors. The city’s residents have rallied behind the governor’s initiative. More and more people are taking part in council meetings, budget consultations and residents’ associations. Organising public hearings, Transparency International Zimbabwe also helped hundreds of citizens come forward to raise concerns directly with their councillors. It is too early to measure the impact on the housing market, but local people are positive about the future. “I had given up hope of ever being a house-owner because I cannot afford the informal rates being charged”, said one resident who had been on the waiting list for 30 years. “The inclusion of residents in allocation decisions has brightened up my accommodation prospects.” *Name has been changed.

Figure 7: Perceptions of the extent of corruption in different institutions Average score from the 107 countries surveyed On a scale of 1 to 5, where 1 means ‘not at all corrupt’ and 5 means ‘extremely corrupt’, to what extent to you see the following categories in this country to be affected by corruption?

Transparency International's Global Corruption Barometer 2013 draws on a survey of more than 114,000 respondents in 107 countries. It addres...

Transparency International's Global Corruption Barometer 2013 draws on a survey of more than 114,000 respondents in 107 countries. It addres...