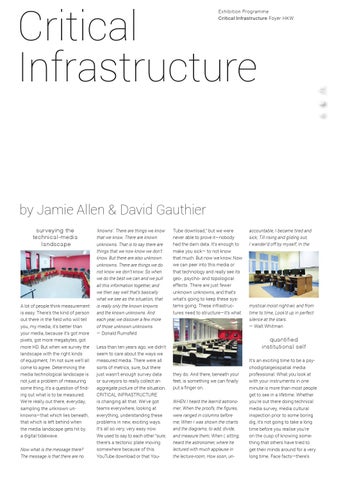 A lot of people think measurement is easy. There’s the kind of person out there in the field who will tell you, my media, it’s better than your media, because it’s got more pixels, got more megabytes, got more HD. But when we survey the landscape with the right kinds of equipment, I’m not sure we’ll all come to agree. Determining the media technological landscape is not just a problem of measuring some thing, it’s a question of finding out what is to be measured. We’re really out there, everyday, sampling the unknown unknowns—that which lies beneath, that which is left behind when the media landscape gets hit by a digital tidalwave. Now what is the message there? The message is that there are no

‘knowns’. There are things we know that we know. There are known unknowns. That is to say there are things that we now know we don’t know. But there are also unknown unknowns. There are things we do not know we don’t know. So when we do the best we can and we pull all this information together, and we then say well that’s basically what we see as the situation, that is really only the known knowns and the known unknowns. And each year, we discover a few more of those unknown unknowns. — Donald Rumsfeld Less than ten years ago, we didn’t seem to care about the ways we measured media. There were all sorts of metrics, sure, but there just wasn’t enough survey data or surveyors to really collect an aggregate picture of the situation. CRITICAL INFRASTRUCTURE is changing all that. We’ve got teams everywhere, looking at everything, understanding these problems in new, exciting ways. It’s all so very, very easy now. We used to say to each other “sure, there’s a tectonic plate moving somewhere because of this YouTube download or that You-

Tube download,” but we were never able to prove it—nobody had the darn data. It’s enough to make you sick— to not know that much. But now we know. Now we can peer into this media or that technology and really see its geo-, psycho- and topological effects. There are just fewer unknown unknowns, and that’s what’s going to keep these systems going. These infrastructures need to structure—it’s what

accountable, I became tired and sick; Till rising and gliding out, I wander’d off by myself, In the

mystical moist night-air, and from time to time, Look’d up in perfect silence at the stars. — Walt Whitman

they do. And there, beneath your feet, is something we can finally put a finger on. WHEN I heard the learn’d astronomer; When the proofs, the ﬁgures, were ranged in columns before me; When I was shown the charts and the diagrams, to add, divide, and measure them; When I, sitting, heard the astronomer, where he lectured with much applause in the lecture-room, How soon, un-

It’s an exciting time to be a psychodigitalgeospatial media professional. What you look at with your instruments in one minute is more than most people get to see in a lifetime. Whether you’re out there doing technical media survey, media cultural inspection prior to some boring dig, it’s not going to take a long time before you realise you’re on the cusp of knowing something that others have tried to get their minds around for a very long time. Face facts—there’s 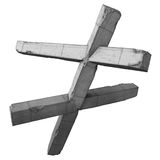 the afterglow transmediale/magazine is a new format of transmediale, a magazine on art and digital culture which marks the continued presen...

the afterglow transmediale/magazine is a new format of transmediale, a magazine on art and digital culture which marks the continued presen...