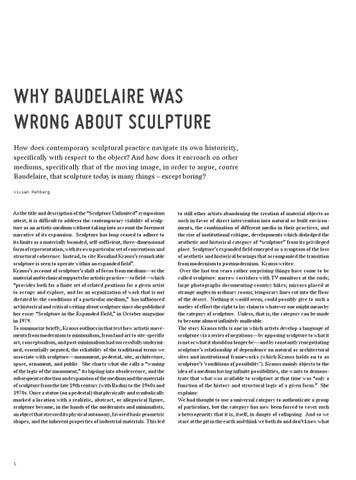 Why BaUdElairE WaS WronG aBoUt SCUlptUrE How does contemporary sculptural practice navigate its own historicity, specifically with respect to the object? And how does it encroach on other mediums, specifically that of the moving image, in order to argue, contre Baudelaire, that sculpture today is many things – except boring? Vivian Rehberg

As the title and description of the “Sculpture Unlimited” symposium attest, it is difficult to address the contemporary viability of sculpture as an artistic medium without taking into account the foremost narrative of its expansion. Sculpture has long ceased to adhere to its limits as a materially bounded, self-sufficient, three-dimensional form of representation, with its own particular set of conventions and structural coherence. Instead, to cite Rosalind Krauss’s remarkable sculpture is seen to operate within an expanded field”. Krauss’s account of sculpture’s shift of focus from medium—or the material and technical supports for artistic practice—to field—which “provides both for a finite set of related positions for a given artist to occupy and explore, and for an organization of work that is not dictated by the conditions of a particular medium,” has influenced art historical and critical writing about sculpture since she published her essay “Sculpture in the Expanded Field,” in October magazine in 1979. To summarize briefly, Krauss outlines in that text how artistic movements from modernism to minimalism, from land art to site-specific art, conceptualism, and post-minimalism had successfully undermined, essentially negated, the reliability of the traditional terms we associate with sculpture—monument, pedestal, site, architecture, space, ornament, and public. She charts what she calls a “waning of the logic of the monument,” its lapsing into obsolescence, and the subsequent reduction and expansion of the medium and the materials of sculpture from the late 19th century (with Rodin) to the 1960s and 1970s. Once a statue (on a pedestal) that physically and symbolically marked a location with a realistic, abstract, or allegorical figure, sculpture became, in the hands of the modernists and minimalists, an object that stressed its physical autonomy, favored basic geometric shapes, and the inherent properties of industrial materials. This led

to still other artists abandoning the creation of material objects as such in favor of direct intervention into natural or built environments, the combination of different media in their practices, and the rise of institutional critique, developments which dislodged the aesthetic and historical category of “sculpture” from its privileged place. Sculpture’s expanded field emerged as a symptom of the loss of aesthetic and historical bearings that accompanied the transition from modernism to postmodernism. Krauss writes: Over the last ten years rather surprising things have come to be called sculpture: narrow corridors with TV monitors at the ends; large photographs documenting country hikes; mirrors placed at strange angles in ordinary rooms; temporary lines cut into the floor of the desert. Nothing it would seem, could possibly give to such a motley of effort the right to lay claim to whatever one might mean by the category of sculpture. Unless, that is, the category can be made to become almost infinitely malleable. The story Krauss tells is one in which artists develop a language of sculpture via a series of negations—by opposing sculpture to what it is not or what it should no longer be—and by constantly renegotiating sculpture’s relationship of dependence on natural or architectural sites and institutional frameworks (which Krauss holds on to as sculpture’s ‘conditions of possibility’). Krauss mainly objects to the idea of a medium having infinite possibilities, she wants to demonstrate that what was available to sculpture at that time was “only a function of the history and structural logic of a given form.” She explains: We had thought to use a universal category to authenticate a group of particulars, but the category has now been forced to cover such a heterogeneity that it is, itself, in danger of collapsing. And so we stare at the pit in the earth and think we both do and don’t know what