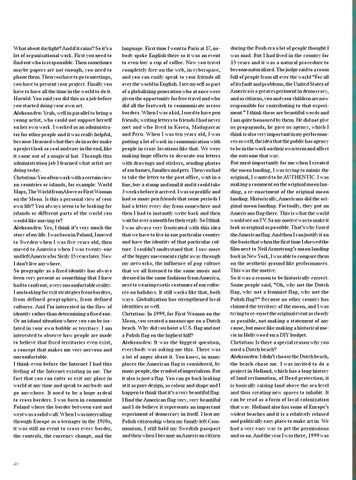 What about daylight? And if it rains? So it’s a lot of organizational work. First you need to find out who is responsible. Then sometimes maybe papers are not enough, you need to phone them. Then you have to go to meetings, you have to present your project. Finally you have to have all the time in the world to do it. Harald: You said you did this as a job before you started doing your own art. Aleksandra: Yeah, well in parallel to being a young artist, who could not support herself on her own work. I worked as an administrator for other people and it was really helpful, because I learned what they do in order make a project look so cool and easy in the end, like it came out of a magical hat. Through this administration job I learned what artist are doing today. Christian: You often work with a certain view on countries or islands, for example: World Maps, The World from Above or First Woman on the Moon. Is this a personal view of your own life? You always seem to be looking for islands or different parts of the world you would like moving to? Aleksandra: Yes, I think it’s very much the story of my life. I was born in Poland, I moved to Sweden when I was five years old, then moved to America when I was twenty-one and left America for Sicily 15 years later. Now I don’t live anywhere. So geography as a fixed identity has always been very present as something that I have had to confront, a very uncomfortable reality. I am looking for exit strategies from borders, from defined geographies, from defined cultures. And I’m interested in the flow of identity rather than determining a fixed one. Or an island situation where you can be isolated in your own bubble or territory. I am interested to observe how people are made to believe that fixed territories even exist, a concept that makes me very nervous and uncomfortable. I think even before the Internet I had this feeling of the Internet existing in me. The fact that you can enter or exit any place in world at any time and speak to anybody and go anywhere. It used to be a huge ordeal to cross borders. I was born in communist Poland where the border between east and west was a solid wall. When I was interrailing through Europe as a teenager in the 1980s, it was still an event to cross every border, the controls, the currency change, and the

language. First time I went to Paris at 17, nobody spoke English there so it was an event to even buy a cup of coffee. Now you travel completely free on the web, in cyberspace, and you can easily speak to your friends all over the world in English. I see myself as part of a globalizing generation who at once were given the opportunity for free travel and who did all the footwork to communicate across borders. When I was a kid, I used to have pen friends; writing letters to friends I had never met and who lived in Korea, Madagascar and Peru. When I was ten years old, I was putting a lot of work in communication with people in crazy locations like that. We were making huge efforts to decorate our letters with drawings and stickers, sending photos of our homes, families and pets. Then you had to take the letter to the post office, wait in a line, buy a stamp and mail it and it could take 3 weeks before it arrived. I was so prolific and had so many pen friends that some periods I had a letter every day from somewhere and then I had to instantly write back and then wait for over a month for their reply. So I think I was always very frustrated with this idea that we have to live in one particular country and have the identity of that particular culture. I couldn’t understand that. I saw more of the bigger movements right away through my networks, the influence of pop culture that we all listened to the same music and dressed in the same fashions from America, next to wearing exotic costumes of our cultures on holidays. It still works like that, both ways. Globalization has strengthened local identities as well. Christian: In 1999, for First Woman on the Moon, you created a moonscape on a Dutch beach. Why did you hoist a U.S. flag and not a Polish flag on the highest hill? Aleksandra: It was the biggest question, everybody was asking me this. There was a lot of anger about it. You know, in many places the American flag is considered, by many people, the symbol of imperialism. But it also is just a flag. You can go back looking at it as pure design, as colour and shape and I happen to think that it’s a very beautiful flag. I find the American flag very, very beautiful and I do believe it represents an important experiment of democracy in itself. I lost my Polish citizenship when my family left Communism, I still hold my Swedish passport and then when I became an American citizen

during the Bush era a lot of people thought I was mad. But I had lived in the country for 15 years and it was a natural procedure to become naturalized. The judge said to a room full of people from all over the world “For all of its fault and problems, the United States of America is a great experiment in democracy, and as citizens, you and your children are now responsible for contributing to that experiment.” I think those are beautiful words and I am quite honoured by them. He did not give us propaganda, he gave us agency, which I think is also very important in my performances as well, the idea that the public has agency to be in the work on their own term and affect the outcome that way. But most importantly for me when I created the moon landing, I was trying to mimic the original, I wanted to be AUTHENTIC. I was making a comment on the original moon landing, a re-enactment of the original moon landing. Historically, Americans did the original moon landing. Factually, they put an Americans flag there. This is what the world would see on TV. So my motive was to make it look as original as possible. That’s why I used the American flag. And then I can justify it on the basis that when the first time I showed the film next to Neil Armstrong’s moon landing back in New York, I was able to compare them on the aesthetic ground like performances. This was the motive. So it was a reason to be historically correct. Some people said, “Oh, why not the Dutch flag, why not a feminist flag, why not the Polish flag?“ Because no other country has claimed the territory of the moon, and I was trying to re-enact the original event as closely as possible, not making a statement of any cause, but more like making a historical movie in Hollywood on a DIY budget. Christian: Is there a special reason why you used a Dutch beach? Aleksandra: I didn’t choose the Dutch beach, the beach chose me. I was invited to do a project in Holland, which has a long history of land reclamation, of flood protection; it is basically raising land above the sea level and thus creating new spaces to inhabit. It can be read as a form of local colonization that way. Holland also has some of Europe’s widest beaches and it is a relatively relaxed and politically easy place to make art in. We had a very easy way to get the permissions and so on. And the year I was there, 1999 was