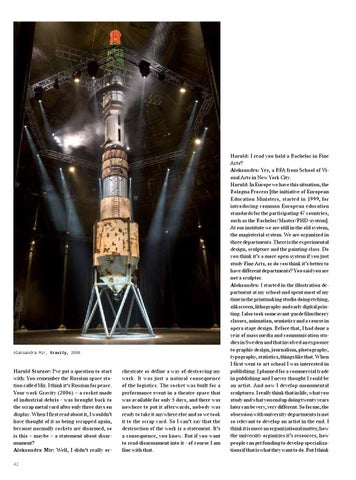 Harald Starzer: I‘ve got a question to start with: You remember the Russian space station called Mir. I think it‘s Russian for peace. Your work Gravity (2006) – a rocket made of industrial debris - was brought back to the scrap metal yard after only three days on display. When I first read about it, I wouldn’t have thought of it as being scrapped again, because normally rockets are disarmed, so is this – maybe – a statement about disarmament? Aleksandra Mir: Well, I didn‘t really or42

chestrate or define a way of destroying my work. It was just a natural consequence of the logistics. The rocket was built for a performance event in a theatre space that was available for only 5 days, and there was nowhere to put it afterwards, nobody was ready to take it anywhere else and so we took it to the scrap yard. So I can‘t say that the destruction of the work is a statement. It‘s a consequence, you know. But if you want to read disarmament into it - of course I am fine with that.

Harald: I read you hold a Bachelor in Fine Arts? Aleksandra: Yes, a BFA from School of Visual Arts in New York City. Harald: In Europe we have this situation, the Bologna Process [the initiative of European Education Ministers, started in 1999, for introducing common European education standards for the participating 47 countries, such as the Bachelor/Master/PHD-system]. At our institute we are still in the old system, the magisterial system. We are organized in three departments. There is the experimental design, sculpture and the painting class. Do you think it’s a more open system if you just study Fine Arts, or do you think it’s better to have different departments? You said you are not a sculptor. Aleksandra: I started in the illustration department at my school and spent most of my time in the printmaking studio doing etching, silkscreen, lithography and early digital printing. I also took some avant-garde film theory classes, animation, semiotics and a course in opera stage design. Before that, I had done a year of mass media and communication studies in Sweden and that involved an exposure to graphic design, journalism, photography, typography, statistics, things like that. When I first went to art school I was interested in publishing. I planned for a commercial trade in publishing and I never thought I could be an artist. And now I develop monumental sculptures. I really think that in life, what you study and what you end up doing twenty years later can be very, very different. So for me, the obsession with university departments is not so relevant to develop an artist in the end. I think it is more an organizational matter, how the university organizes it’s resources, how people can get funding to develop specializations if that is what they want to do. But I think