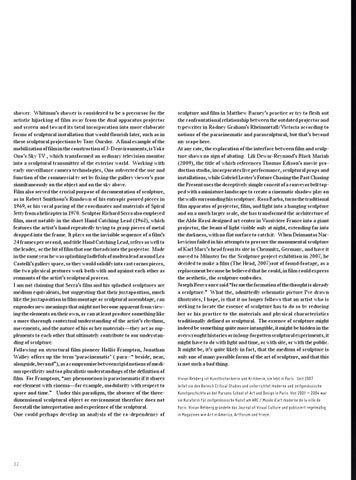 shower. Whitman’s shower is considered to be a precursor for the artistic hijacking of film away from the dual apparatus projector and screen and toward its total incorporation into more elaborate forms of sculptural installation that would flourish later, such as in these sculptural projections by Tony Oursler. A final example of the mobilization of film in the construction of 3-D environments, is Yoko Ono’s Sky TV , which transformed an ordinary television monitor into a sculptural transmitter of the exterior world. Working with early surveillance camera technologies, Ono subverted the use and function of the commercial tv set by fixing the gallery viewer’s gaze simultaneously on the object and on the sky above. Film also served the crucial purpose of documentation of sculpture, as in Robert Smithson’s Rundown of his entropic poured pieces in 1969, or his vocal pacing of the coordinates and materials of Spiral Jetty from a helicopter in 1970. Sculptor Richard Serra also employed film, most notably in the short Hand Catching Lead (1968), which features the artist’s hand repeatedly trying to grasp pieces of metal dropped into the frame. It plays on the invisible sequence of a film’s 24 frames per second, and title Hand Catching Lead, refers as well to the leader, or the bit of film that one threads into the projector. Made in the same year he was splashing ladlefuls of molten lead around Leo Castelli’s gallery space, so they would solidify into cast corner pieces, the two physical gestures work both with and against each other as remnants of the artist’s sculptural process. I am not claiming that Serra’s film and his splashed sculptures are medium equivalents, but suggesting that their juxtaposition, much like the juxtaposition in film montage or sculptural assemblage, can engender new meanings that might not become apparent from viewing the elements on their own, or can at least produce something like a more thorough contextual understanding of the artist’s rhythms, movements, and the nature of his or her materials—they act as supplements to each other that ultimately contribute to our understanding of sculpture. Following on structural film pioneer Hollis Frampton, Jonathan Walley offers up the term ‘paracinematic’ ( para--“ beside, near, alongside, beyond”), as a compromise between rigid notions of medium specificity and too pluralistic understandings of the definition of film. For Framptom, “any phenomenon is paracinematic if it shares one element with cinema—for example, modularity with respect to space and time.” Under this paradigm, the absence of the threedimensional sculptural object or environment therefore does not forestall the interpretation and experience of the sculptural. One could perhaps develop an analysis of the co-dependency of

sculpture and film in Matthew Barney’s practice or try to flesh out the confrontational relationship between the outdated projector and typewriter in Rodney Graham’s Rheinmetall/Victoria according to notions of the paracinematic and parasculptural, but that’s beyond my scope here. At any rate, the exploration of the interface between film and sculpture shows no sign of abating. Lili Dewar-Reynaud’s Black Mariah (2009), the title of which references Thomas Edison’s movie production studio, incorporates live performance, sculptural props and installations, while Gabriel Lester’s Future Chasing the Past Chasing the Present uses the deceptively simple conceit of a conveyor belt topped with a miniature landscape to create a cinematic shadow play on the walls surrounding his sculpture. Rosa Barba, turns the traditional film apparatus of projector, film, and light into a hanging sculpture and on a much larger scale, she has transformed the architecture of the Aldo Rossi designed art center in Vassivière France into a giant projector, the beam of light visible only at night, extending far into the darkness, with no flat surface to catch it. When Deimantas Narkevicius failed in his attempts to procure the monumental sculpture of Karl Marx’s head from its site in Chemnitz, Germany, and have it moved to Münster for the Sculpture project exhibition in 2007, he decided to make a film (The Head, 2007)out of found-footage, as a replacement because he believed that he could, in film could express the aesthetic, the sculpture embodies. Joseph Beuys once said “for me the formation of the thought is already a sculpture.” What the, admittedly schematic picture I’ve drawn illustrates, I hope, is that it no longer follows that an artist who is seeking to locate the essence of sculpture has to do so by reducing her or his practice to the materials and physical characteristics traditionally defined as sculptural. The essence of sculpture might indeed be something quite more intangible, it might be hidden in the overwrought histories or in long-forgotten sculptural experiments, it might have to do with light and time, or with site, or with the public. It might be, it’s quite likely in fact, that the medium of sculpture is only one of many possible forms of the art of sculpture, and that this is not such a bad thing. Vivian rehberg ist kunsthistorikerin und kritikerin, sie lebt in paris. seit 2007 leitet sie den Bereich critical studies und unterrichtet moderne und zeitgenössische kunstgeschichte an der parsons school of art and design in paris. Von 2001 – 2004 war sie kuratorin für zeitgenössische kunst am arc / musée d’art moderne de la ville de paris. Vivian rehberg gründete das Journal of Visual culture und publiziert regelmäßig in magazinen wie art in america, artforum und frieze.