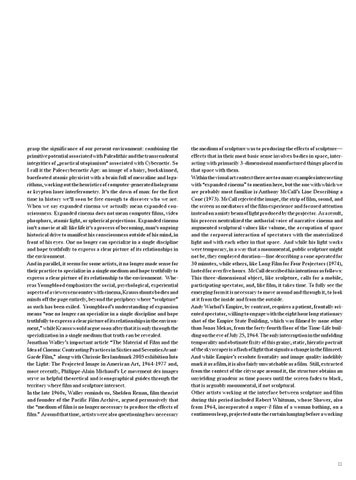 the medium of sculpture was to producing the effects of sculpture— effects that in their most basic sense involves bodies in space, interacting with primarily 3-dimensional manufactured things placed in that space with them. Within the visual art context there are too many examples intersecting with “expanded cinema” to mention here, but the one with which we are probably most familiar is Anthony McCall’s Line Describing a Cone (1973). McCall rejected the image, the strip of film, sound, and the screen as mediators of the film experience and focused attention instead on a misty beam of light produced by the projector. As a result, his process neutralized the authorial voice of narrative cinema and augmented sculptural values like volume, the occupation of space and the corporeal interaction of spectators with the materialized light and with each other in that space. And while his light works were temporary, in a way that a monumental, public sculpture might not be, they employed duration—line describing a cone operated for 30 minutes, while others, like Long Film for Four Projectors (1974), lasted for over five hours. McCall described his intentions as follows: This three-dimensional object, like sculpture, calls for a mobile, participating spectator, and, like film, it takes time. To fully see the emerging form it is necessary to move around and through it, to look at it from the inside and from the outside. Andy Warhol’s Empire, by contrast, requires a patient, frontally oriented spectator, willing to engage with the eight hour long stationary shot of the Empire State Building, which was filmed by none other than Jonas Mekas, from the forty-fourth floor of the Time-Life building on the eve of July 25, 1964. The only interruption in the unfolding temporality and obstinate fixity of this grainy, static, hieratic portrait of the skyscraper is a flash of light that signals a change in the film reel. And while Empire’s resolute frontality and image quality indelibly mark it as a film, it is also fairly unwatchable as a film. Still, extracted from the context of the cityscape around it, the structure obtains an unyielding grandeur as time passes until the screen fades to black, that is arguably monumental, if not sculptural. Other artists working at the interface between sculpture and film during this period included Robert Whitman, whose Shower, also from 1964, incorporated a super-8 film of a woman bathing, on a continuous loop, projected onto the curtain hanging before a working