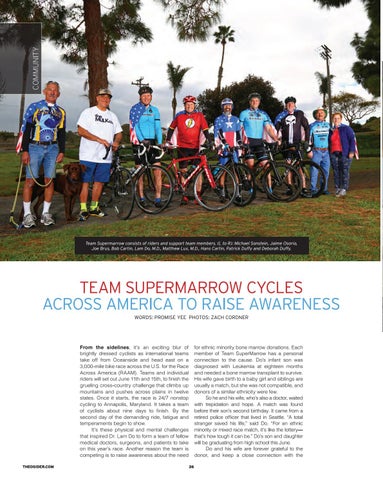 From the sidelines, it’s an exciting blur of brightly dressed cyclists as international teams take off from Oceanside and head east on a 3,000-mile bike race across the U.S. for the Race Across America (RAAM). Teams and individual riders will set out June 11th and 15th, to finish the grueling cross-country challenge that climbs up mountains and pushes across plains in twelve states. Once it starts, the race is 24/7 nonstop cycling to Annapolis, Maryland. It takes a team of cyclists about nine days to finish. By the second day of the demanding ride, fatigue and temperaments begin to show. It’s these physical and mental challenges that inspired Dr. Lam Do to form a team of fellow medical doctors, surgeons, and patients to take on this year’s race. Another reason the team is competing is to raise awareness about the need THEOSIDER.COM

for ethnic minority bone marrow donations. Each member of Team SuperMarrow has a personal connection to the cause. Do’s infant son was diagnosed with Leukemia at eighteen months and needed a bone marrow transplant to survive. His wife gave birth to a baby girl and siblings are usually a match, but she was not compatible, and donors of a similar ethnicity were few. So he and his wife, who’s also a doctor, waited with trepidation and hope. A match was found before their son’s second birthday. It came from a retired police officer that lived in Seattle. “A total stranger saved his life,” said Do. “For an ethnic minority or mixed race match, it’s like the lottery— that’s how tough it can be.” Do’s son and daughter will be graduating from high school this June. Do and his wife are forever grateful to the donor, and keep a close connection with the 26