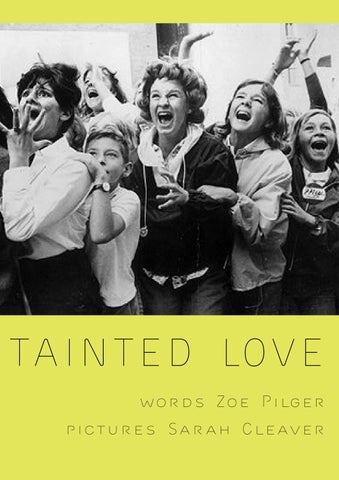 To be tainted is to be stained, polluted, ‘touched’ in the sense of madness or possession. It suggests a state of purity, spoiled. To be tainted according to the original Middle English meaning of the word was to be proven guilty of a crime and condemned. Is love a condemnation? The pleasures of romantic pain have long provided an opportunity for artists and writers to create. While the presence of the love object may sate one’s desire, distance is a spur to make art. Unrequited love is a means to conjure a spectrum of extreme emotions while maintaining a private world based on fantasy. Such solitary - even solipsistic - passion is both punishing and perverse. As Roland Barthes wrote in A Lover’s Discourse: Fragments (1977): ‘I experience myself both as victim and executioner.’ Travelling from Transition Gallery, London, to Meter Room, Coventry, and finally to Down Stairs at the beautiful Great Brampton House, Hereford, Tainted Love is an exhibition of new work by twelve artists, curated by Corinna Spencer. A labyrinthine series of folding screens provides each artist with his or her own space in which to worship or desecrate a private idol. These shrines are related though broad in scope; each artist has adapted the theme to his or her own practice.. The screens evoke the cramped, frustrated space of a teenage bedroom in which desire can only ever be projected onto an abstract and indifferent love object. Kirsty Buchanan’s film imposes the face of Leonardo di Caprio onto a blue sky, accompanied by a delirious, electro chorus: ‘I’m on fire!’ Buchanan’s own legs are visible, upside down, kicking along to the music, wearing a pair of white stilettoes. Above the monitor, drawings of surrealist female lips and eyes, disembodied and maniacally multiplied, suggest a dreamscape of adolescent yearning. Di Caprio’s floppy blonde fringe and floating blue eyes point to the internalisation of the idol. Incarnated as Romeo, he has become part of her psyche - even possessed by it.

‘A brief and brutal blindness’ is printed across the melancholy face of woman in Hayley Lock’s display of cryptic symbolism. This black and white photograph is accompanied by another, branded with the words: ‘Your kiss is bitter with cocaine.’ The image shows a little girl adorned in white Victoriana. Indeed, the act of branding itself becomes a metaphor for the permanence and pain of love. Elsewhere, a photograph shows human flesh seared with the markings of an obscure and cultish cross – an extreme sign of devotion? 6

Alice Andersonâ&amp;#x20AC;&amp;#x2122;s striking sculpture of eight tubes wrapped tightly in copper wire, evocative of her own red hair, contains objects from her studio. The fact that these objects are hidden from view yet present, prized yet rendered absent by their encasement, poses questions of secrecy and revelation in relation to what is loved. Should we protect and in so doing conceal that with which we are obsessed? Does possession entail a kind of suffocation, even embalmment, of the love object or, in this case, objects? 7

The truncated torsos of exultant men are transformed into bedroom wallpaper in Paul Kindersley’s installation, which creates a visual language out of the results of a Google search. ‘Our Idols and Demons Pursue Us’ is written over a photograph of two sailors, suggesting wish-fulfilment rather than reality. In fact the absent subject/fan is himself engaged in the pursuit – via the process of invention – of his idols and demons. The latter seem to merge in this cloying, sexually charged den.

A girl brings her face very close to the ground, opening her mouth wide so she can eat the flower whole. Georgie Flood’s image is painted a phosphorescent green. The girl’s features are impressionistic; she appears subject to a desperate kind of will. Despite her proximity to nature, the green is unnatural, putrid. So too is the sculpture of a pile of white heads, daubed with black and gold, but more akin to a faded, fake icecream scoop than the remnants of a genocide. Far from swooning sentimentalism, Flood’s works are invested with an aggressive kind of love.

Alli Sharma’s series of black and white paintings point to a nostalgia for the music of her adolescence. They show The Smiths’ artwork, including the record sleeve of The Queen Is Dead. The latter is adorned with the face of French noir actor Alain Delon, and points to Morrissey’s own obsessions. Fandom here assumes a retrospective function; no longer contained in her teenage bedroom, Sharma nonetheless recreates her fixations of that period; childhood and adulthood converge to produce intense yearnings for that which is both past and possible.

Corinna Spencerâ&amp;#x20AC;&amp;#x2122;s homage to The Assassination of Jesse James is comprised of a series of postcards painted with scenes from the 2007 film, directed by Andrew Dominink. While the postcards are found objects, their visual content irrelevant to the project, Spencer has emulated the classicism of 19th century family portraits. Here Jamesâ&amp;#x20AC;&amp;#x2122; skin is rendered a pasty, impure white. Narrative clues are offered by more panoramic images: the impressionistic hint of horses disappearing in a white landscape. These images appear removed from their cinematic origin; they pose questions: is fandom plagiaristic â&amp;#x20AC;&amp;#x201C; even parasitic? Or simply creatively appropriative?

On first sight, Jessica Voorsangerâ&amp;#x20AC;&amp;#x2122;s installation looks like the off-stage ensemble of a celebrity impersonator. The famous Warhol white wig hangs next to a black jacket emblazoned with the name â&amp;#x20AC;&amp;#x2DC;Lennon.â&amp;#x20AC;&amp;#x2122; To the right, a red patterned dress with matching bonnet is less easily identifiable; it unsettles the viewer. Who, or what, is the focus of this obsession? The dead celebrities themselves - Warhol, Lennon, Abraham Lincoln - or those who achieved fame by murdering their idols? 12

After constructing shrines to two bands - My Chemical Romance and 30 Seconds to Mars - Mark Scott Wood invited fans to vote through social media. Battle of the Bands may be understood as a response to reality TV culture, whereby the language of democracy and the principle of public participation is co-opted. The idea of political ‘voice’ is substituted for the right to make statements of preference, mostly revolving around pop culture. In this instance, the fans were asked to decide which shrine should be included in the show. The shrines themselves are compact and composed of wooden boxes, which open to reveal the quasisacred paraphernalia of hero-worship, such as a signed CD, stickers and badges. Ultimately, Scott Wood elected to include both shrines, thus annulling the public vote and rendering obsolete the parameters of his own project. Below the shrines, pencil portraits of band members possess the creepy qualities of the pedantically – and ludicrously – obsessed. 13

Annabel Dover’s series of delicate oil paintings represent perhaps the most radical swerve from the show’s theme. Instead of tainted love as a chronic state of infatuation, Dover’s paintings point to the Victorian mania for ordering and classifying the natural world. Here opaque and subtle renderings of plants and flowers against a cream background suggest both reverence for nature and the will-to-know embodied in the Enlightenment’s scientific quest. The artificiality with which the plants and flowers are arranged – as if on an operating table – belies the expressionistic application of paint and the inexact, almost child-like patience with which they are brought to light. The latter is a loaded term, suggesting both a scientific exposition and a secular reverence for that which seems beyond one’s understanding.

The Sixteen Most Beautiful Men is a series of oil paintings by Cathy Lomax. Displayed in sequence across three screens, Lomax’s installation alludes to the triptych while possessing the qualities of a 1980s film reel. Indeed, the images of Adonis-like men, complete with refined bone structures, chiselled jaws, and quiffs, are derived from cinema. The viewer is confronted with a hazy sense of familiarity; some of these portraits are identifiable – Elvis – while others seem abstracted by the artist/fan’s own desire. Here the processes of the imagination appear to have converted known figures into dream-like approximations of real men. 14

Andrea Hannon’s installation is centred on a book: The Fool Hath Said, published in 1907. Inside, the pages have been overlaid by more pages. The latter have been strategically – perhaps randomly – cut away, to reveal fragments of sentences and words that coalesce to form new meanings. The result is poetic: ‘A new beginning… paralyzed by a fall.’ Here Hannon draws out the conventional motifs of romantic love – such as the idea of falling – and endows it with an eerie kind of melancholy. The book is supplemented by collaged scenes encased in glass: a woman beseeching or mauling her lover, surrounded by bright pink flowers. Objects are endowed with their own history: a pair of scissors, a porcelain figurine, and an antique box complete with hidden compartments. There is a sense of a private melodrama, recalled only through relics.

‘Where does fantasy, condemned by psychiatric rather than artistic standards, end and imagination begin?’ asked Susan Sontag in her seminal 1965 essay The Pornographic Imagination. In radically different ways, each artist in this exhibition has interrogated the mania of continuing to want that which continually eludes one’s grasp. The object of desire hovers somewhere in front, or just beyond. It can be seen – or, in the case of Alice Anderson’s work – it is deliberately removed from sight. The object of desire may exist as an idea, made manifest in the flesh of the other. Perhaps more productively, it is made manifest in the act of creating the work itself. Catharsis or cure seems remote, however. The lover/artist returns again and again to what Barthes deemed a ‘series of No Exits.’

Tainted Love was an exhibition by 12 artists that toured to 3 venues in the UK in 2012. This book with words by Zoe Pilger and pictures by Sarah Cleaver is a record of the exhibition in its final incarnation at Down Stairs at Great Brampton House in Herefordshire.