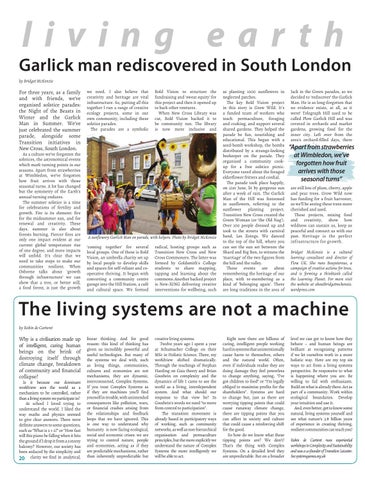 For three years, as a family and with friends, we’ve organised solstice parades: the Night of the Beasts in Winter and the Garlick Man in Summer. We’ve just celebrated the summer parade, alongside some Transition initiatives in New Cross, South London.

As a culture we’ve forgotten the solstices, the astronomical events which mark turning points in our seasons. Apart from strawberries at Wimbledon, we’ve forgotten how fruit arrives with those seasonal turns. A lot has changed but the symmetry of the Earth’s annual turning endures. The summer solstice is a time for celebrations of fertility and growth. Fire is its element: fire for the midsummer sun, and for renewal and creativity. These days, summer is also about forests burning. Fiercer fires are only one impact evident at our current global temperature rise of one degree, and more impacts will unfold. It’s clear that we need to take steps to make our communities resilient. When Osborne talks about ‘growth through infrastructure’ we can show that a tree, or better still, a food forest, is just the growth

we need. I also believe that creativity and heritage are vital infrastructure. So, putting all this together I run a range of creative ecology projects, some in our own community, including these solstice parades.   The parades are a symbolic

Bold Vision to structure the fundraising and ‘sweat equity’ for this project and then it opened up to back other ventures. When New Cross Library was cut, Bold Vision backed it to be community run. The library is now more inclusive and

A sunflowery Garlick Man on parade, with helpers. Photo by Bridget McKenzie ‘coming together’ for several local groups. One of these is Bold Vision, an umbrella charity set up by local people to develop skills and spaces for self-reliant and cooperative thriving. It began with converting a community centre garage into the Hill Station, a café and cultural space. We formed

radical, hosting groups such as Transition New Cross and New Cross Commoners. The latter was formed by Goldsmith’s College students to share mapping, tapping and learning about the commons. Another backed project is New-XING delivering creative interventions for wellbeing, such

as planting 1000 sunflowers in neglected patches. The key Bold Vision project in this story is Grow Wild. It’s a funded team of workers who teach permaculture, foraging and cooking, and support several shared gardens. They helped the parade be fun, nourishing and educational. This began with a seed-bomb workshop, the bombs distributed by a strange-looking beekeeper on the parade. They organised a community cookup for a free solstice picnic. Everyone raved about the foraged elderflower fritters and cordial.   The parade took place happily, on 21st June, lit by gorgeous sun after a week of rain. The Garlick Man of the Hill was festooned in sunflowers, referring to the sunflower planting project. Transition New Cross created the Green Woman (or ‘the Old Nag’). Over 100 people dressed up and took to the streets with carnival band, Les Zoings. We danced to the top of the hill, where you can see the sun set between the Shard and Big Ben, to witness the ‘marriage’ of the two figures from the hill and the valley. These events are about remembering the heritage of our place, with re-membering as a kind of ‘belonging again’. There are long traditions in the area of

Jack in the Green parades, so we decided to ‘rediscover’ the Garlick Man. He is so long-forgotten that no evidence exists, at all, as it were! Telegraph Hill used to be called Plow Garlick Hill and was covered in orchards and market gardens, growing food for the inner city. Left over from the area’s orchard-filled days, there

“Apart from strawberries at Wimbledon, we’ve forgotten how fruit arrives with those seasonal turns” are still lots of plum, cherry, apple and pear trees. Grow Wild now has funding for a fruit harvester, so we’ll be seeing these trees more cherished and used. These projects, mixing food and creativity, show how wildness can sustain us, keep us peaceful and connect us with our past. Heritage is the perfect infrastructure for growth. Bridget McKenzie is a cultural learning consultant and director of Flow UK. She runs Beuysterous, a campaign of creative actions for trees, and is forming a thinktank called the Learning Planet. For more visit the website at aboutbridgetmckenzie. wordpress.com

The living systems are not a machine by Robin de Carteret

Why is a civilisation made up of intelligent, caring human beings on the brink of destroying itself through climate change, breakdown of community and financial collapse?

Is it because our dominant worldview sees the world as a mechanism to be controlled, rather than a living system we participate in? At school I loved trying to understand the world. I liked the way maths and physics seemed to give clear answers. There were definite answers to some questions, such as “What is 2 + 2?” or “How fast will this piano be falling when it hits the ground if I drop it from a 3 storey balcony?’ However, our society has been seduced by the simplicity and 20 clarity we find in analytical,

linear thinking. And for good reason: this kind of thinking has given us incredibly powerful and useful technologies. But many of the systems we deal with, such as living things, communities, cultures and economies are not mechanisms, they are dynamic, interconnected, Complex Systems. If you treat Complex Systems as if they are machines you’ll find yourself in trouble, with unintended consequences like pollution, wars, or financial crashes arising from the relationships and feedback loops that we have ignored. This is one way to understand why humanity is now facing ecological, social and economic crises: we are trying to control nature, people and economies, acting as if they are predictable mechanisms, rather than inherently unpredictable but

creative living systems. Twelve years ago I spent a year at Schumacher College on their MSc in Holistic Science. There, my worldview shifted dramatically. Through the teachings of Stephan Harding on Gaia theory and Brian Goodwin on complexity and the dynamics of life I came to see the world as a living, interdependent system. And what should our response to that view be? In Goodwin’s words we need “to move from control to participation”. The transition movement is already based in participatory ways of working, such as community networks, as well as non-hierarchical organisation and permaculture principles, but the more explicitly we understand the nature of Complex Systems the more intelligently we will be able to act.

Right now there are billions of caring, intelligent people working hard in systems that unintentionally cause harm to themselves, others and the natural world. Often, even if individuals realise they are doing damage they feel powerless to change anything, saying, “I’ve got children to feed” or “I’m legally obliged to maximise profits for the shareholders”. Systems are hard to change but, just as there are worrying tipping points that could cause runaway climate change, there are tipping points that you can affect in society and culture that could cause a reinforcing shift for the good. So how do we know what these tipping points are? We don’t! That’s the thing with Complex Systems. On a detailed level they are unpredictable. But on a broader

level we can get to know how they behave – and human beings are brilliant at recognising patterns if we let ourselves work in a more holistic way. Here are my top six ways to act from a living systems perspective. Be responsive to what is happening where you are. Be willing to fail with enthusiasm. Build on what is already there. Act as part of a community. Work within ecological boundaries. Develop your intuition and use it. And, even better, get to know some natural, living systems yourself and see what nature’s 3.8 billion years of experience in creating thriving, resilient communities can teach you! Robin de Carteret runs experiential workshops in Complexity and Sustainability and was a co-founder of Transition Leicester. See systemsgames.org.uk 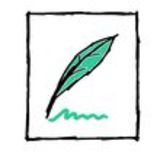