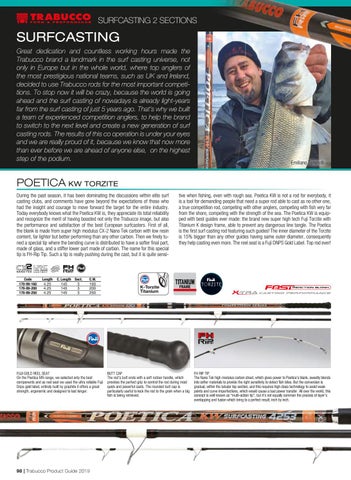 SURFCASTING Great dedication and countless working hours made the Trabucco brand a landmark in the surf casting universe, not only in Europe but in the whole world, where top anglers of the most prestigious national teams, such as UK and Ireland, decided to use Trabucco rods for the most important competitions. To stop now it will be crazy, because the world is going ahead and the surf casting of nowadays is already light-years far from the surf casting of just 5 years ago. That’s why we built a team of experienced competition anglers, to help the brand to switch to the next level and create a new generation of surf casting rods. The results of this co operation is under your eyes and we are really proud of it, because we know that now more than ever before we are ahead of anyone else, on the highest step of the podium.

POETICA KW TORZITE During the past season, it has been dominating the discussions within elite surf casting clubs, and comments have gone beyond the expectations of those who had the insight and courage to move forward the target for the entire industry. Today everybody knows what the Poetica KW is, they appreciate its total reliability and recognize the merit of having boosted not only the Trabucco image, but also the performance and satisfaction of the best European surfcasters. First of all, the blank is made from super high modulus CX-2 Nano Tek carbon with low resin content, far lighter but better performing than any other carbon. Then we finely tuned a special tip where the bending curve is distributed to have a softer final part, made of glass, and a stiffer lower part made of carbon. The name for this special tip is FH-Rip Tip. Such a tip is really pushing during the cast, but it is quite sensi-

FUJI GOLD REEL SEAT On the Poetica MN range, we selected only the best components and as reel seat we used the ultra reliable Fuji Dnps gold label, entirely built by graphite it offers a great strength, ergonomic and designed to last longer.

tive when fishing, even with rough sea. Poetica KW is not a rod for everybody, it is a tool for demanding people that need a super rod able to cast as no other one, a true competition rod, competing with other anglers, competing with fish very far from the shore, competing with the strength of the sea. The Poetica KW is equipped with best guides ever made: the brand new super high tech Fuji Torzite with Titanium K design frame, able to prevent any dangerous line tangle. The Poetica is the first surf casting rod featuring such guides! The inner diameter of the Torzite is 15% bigger than any other guides having same outer diameter, consequently they help casting even more. The reel seat is a Fuji DNPS Gold Label. Top rod ever!

BUTT CAP The rod’s butt ends with a soft rubber handle, which provides the perfect grip to control the rod during most quick and powerful casts. The rounded butt cap is particularly useful to lock the rod to the groin when a big fish is being retrieved.

FH RIP TIP The Nano Tek high modulus carbon sheet, which gives power to Poetica’s blank, sweetly blends into softer materials to provide the right sensitivity to detect fish bites. But the conversion is gradual, within the tubular top section, and this requires high class technology to avoid weak points and curve imperfections, which would cause a bad power transfer. All over the world, this concept is well known as “multi-action tip”, but it’s not equally common the process of layer’s overlapping and fusion which bring to a perfect result, inch by inch. 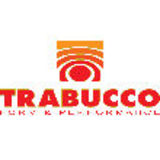