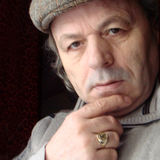 Albanian -American poet and writer, a journalist by profession, graduated from the University of Tirana, Albania in 1975. 1975-1991 scriptwriter for Kinostudio Albafilm Tirane, Albania. Traboini work included writing of scripts for documentary films. Recived 1-st National Prize for the film "Asdreni", 1976, First for the film "Kështjella e Këngëve" (The Castle of Songs), also won the best Film of the Year 1990 for the film "Dëshmi nga Barleti" (Witness from Barleti) - a war history of 1468-1478, in her hometown Shkoder, North Albania. He is the founder of the Albanian newspaper “Egnatia” in Athens, 1993, author of 34 books of poems, prose, and essays, and is one of the most active creative contributors of the Albanian Community in America. He live in Boston & Tirana and is a contributor to the Albanian-American Newspaper “Illyria” in New York, and newspapers and magazins published in his native country, Albania.