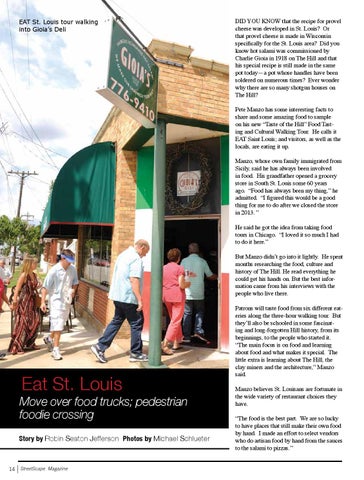 DID YOU KNOW that the recipe for provel cheese was developed in St. Louis? Or that provel cheese is made in Wisconsin specifically for the St. Louis area? Did you know hot salami was commissioned by Charlie Gioia in 1918 on The Hill and that his special recipe is still made in the same pot today—a pot whose handles have been soldered on numerous times? Ever wonder why there are so many shotgun houses on The Hill? Pete Manzo has some interesting facts to share and some amazing food to sample on his new “Taste of the Hill” Food Tasting and Cultural Walking Tour. He calls it EAT Saint Louis; and visitors, as well as the locals, are eating it up. Manzo, whose own family immigrated from Sicily, said he has always been involved in food. His grandfather opened a grocery store in South St. Louis some 60 years ago. “Food has always been my thing,” he admitted. “I figured this would be a good thing for me to do after we closed the store in 2013.” He said he got the idea from taking food tours in Chicago. “I loved it so much I had to do it here.” But Manzo didn’t go into it lightly. He spent months researching the food, culture and history of The Hill. He read everything he could get his hands on. But the best information came from his interviews with the people who live there.

Patrons will taste food from six different eateries along the three-hour walking tour. But they’ll also be schooled in some fascinating and long-forgotten Hill history, from its beginnings, to the people who started it. “The main focus is on food and learning about food and what makes it special. The little extra is learning about The Hill, the clay miners and the architecture,” Manzo said. Manzo believes St. Louisans are fortunate in the wide variety of restaurant choices they have. “The food is the best part. We are so lucky to have places that still make their own food by hand. I made an effort to select vendors who do artisan food by hand from the sauces to the salami to pizzas.”

Jay Leno, Strange Donuts, Eat STL AND Women's Roller Derby! This is a can't miss issue jammed pack with life altering stories of strength and courage to students changing the ways of technology one robot at a time. Read, share and be inspired. 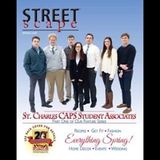